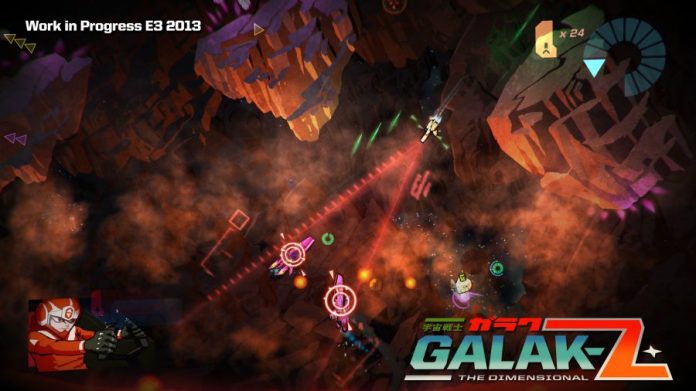 Shoot-em-ups, not to be mistaken for Shooters mind you, have always fascinated me. I’ll admit, even if I consider myself a gamer – this is one genre I can’t touch. Flashing lights, thousands of items on the screen at once, rockets and lasers in all directions, it’s just too much! I bow in admiration to the players in Japan littering Youtube with their Super Extreme Hardcore Hyperdrive Difficulty skills. It might not look like it to some, but there is a lot of concentration that goes on in these seemingly simple 2D arcade games!

Even with my fear and lack of articulation one title has made its way across my asteroid infested radar (see what I did there? no..?), GALAK-Z. Created by 17-Bit Studios (the guys who brought you Skulls of the Shogun), GALAK-Z may seem like Asteroids/Space Invaders from afar– but I promise you, Asteroid ain’t got jack on what you are about to see.

Made with a dash of fast paced action and a pinch of awesome anime inspired tropes, GALAK-Z takes the SHMUP genre to a new high. With vibrant graphics, a beautiful score, and intuitive game play elements, this title is sure to wow lucky PS4 owners sometime 2014. Check out the trailer below:

Let’s cross our fingers and hope this isn’t a Sony Exclusive!