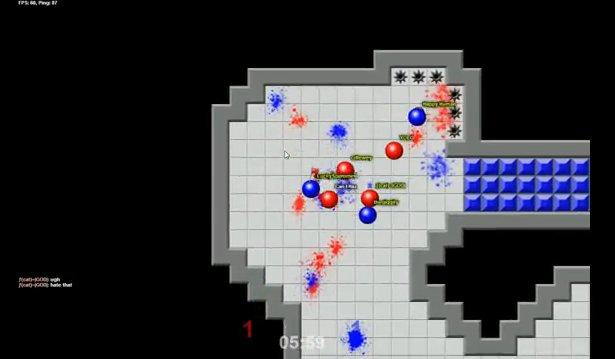 I’m on a quest right now. No, not to save a princess or capture the flag, a quest to bring us back to a time when video games were readily and easily enjoyable. When we were young and were able to populate websites like Newgrounds and Arcadepod to find small, fun to play, easy to get into morsels. Blinded by the constant evolution of sheer computation power and 3D rendering, we often forget about the time when most gaming was done through flash– or java. It’s incredible because although many of these designers may not have had games aesthetically superior, they had ideas that flourished and were much more impressive than our current lineup. So here on Unigamesity, I have taken it upon myself– a quest. The quest. Game Find.

My first game is one that exemplifies the idea of low graphics, fun-as-hell to play mentality. Tag Pro, an online multiplayer, capture the flag style game.

Created by game designer Nick Riggs (Koalabeast), Tag Pro has an overly simple premise. You take the flag, you bring it home. Don’t get tagged by the opposite team while you have it, and don’t run into deadly traps. Sounds..too simple huh? Kinda..actually really boring..right?

What Tag Pro may seemingly lack in graphics or special effects, it makes up in with cringing close calls, amazingly satisfying plays, and a sense of team work that can only be found here. Maneuvering your, ahem– balls, is seemingly difficult at first, designed with just the perfect sweet spot of reaction time and result (giving the slippery feeling of sliding on ice almost). This makes the game much more difficult to master than it looks, but when you capture that flag, set off a trap, or block another player from scoring– there is a sense of wholeness and satisfaction unrivaled by any other emotion your brain can attempt to muster up. Saving puppies from a fire pales in comparison to the amount of joy this game brings.

There are a string of great things that can be said about Tag Pro, but unfortunately– I’m to busy playing a game right now on my second monitor. Tag Pro can be found here: http://tagpro.koalabeast.com/

If you are sick of Call of Duty and games of the like, make sure to share and tweet! Support developers willing to be different, and believe me, Tag Pro is different.

GAME FIND is a weekly released collection of articles written by Unigamesity grunt Dinh-Hy Truong. DhTruong is out on a quest to find underrated, awesome games that are fun– free, and easy to chew on. For more overlooked, amazingly fun games, make sure to check back in on– Unigamesity.