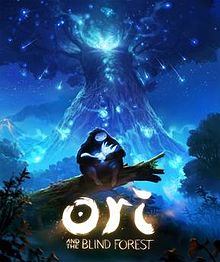 Ori and the Blind Forest is an indie game by Moon Studios that has won several awards in artistic achievement, animation, and musical composition.

You begin the game as a small forest spirit named Ori, who falls from the Spirit Tree during a storm. He is adopted by a creature named Naru but is quickly orphaned when a devastating event sweeps through the forest and wipes out their food resources. Naru gives Ori the remaining food and starves to death. Now, Ori must set out into the forest alone in an attempt to stay alive.

The young spirit eventually loses energy and collapses near the Spirit Tree. A blue orb named Sein revives him. Here, the prologue ends, and the game begins. From here on out, Ori and Sein set off to restore balance to the forest. They recover its main elements: Waters, Winds, and Warmth.

Two other primary characters are introduced at this point – Gumo and Kuru. Gumo is a spider-like creature who seems evil initially but becomes a friend when Ori helps them out of a sticky situation. Kuru is a large owl. It remains an antagonist for much longer, but its aggressive nature is explained in the game’s latter stages.

Gumo uses stored light from the Spirit Tree to help Naru. They team up to protect Sein and Ori, working together to restore warmth in the forest. Gumo sees the dangers that lie ahead, and in the game’s final act, Kuru catches Ori and Sein, but Naru protects them. Kuru changes his heart and takes Sein back to the Spirit Tree’s top to end the spread of fire throughout the forest. A giant light emits, wiping out the fire but ultimately wiping Kuru out in the process.

What You Need to Do:

Your task as the hero is to bring Ori back to his home and save the forest from dying. As you go through the game, you will gain more abilities. Eventually, you will be able to spend experience points on three different skill trees.

The ability tree is a collection of various knacks that Ori can purchase with Ability points and enhance their performance. The available abilities can cost either 1,2 or 3 points at a time. If you fail to produce the proper payment, Ori will be prevented from receiving that ability until they have accumulated enough points.

Abilities may also be unattainable because Ori doesn’t have the skill that it enhances or has not bought the ability to come before it. If either of these options is true, the text below the description of the ability will be bright red. This will indicate that Ori does not have the necessary requirements to have that particular ability.

The tree has three branches, each with abilities that share a common theme. They are:

You may be wondering what the best skill point build is, but ultimately, the answer to this question depends entirely on your gameplay. Investing ability points in the survival brand can make the game a lot easier, especially when you get to the Triple Jump. Offensive capabilities are convenient but not necessary. Most deaths in the game are caused by environmental damage. To find secret areas and extra pickups, you can search the exploration line or even the internet for additional information.

Ori and the Blind Forest is an adventure game with beautifully designed visuals and an outstanding score. Developed by Moon Studios, it was released on March 1th for Windows, Xbox 360, and Xbox One. Reviewers have highly praised the storyline, graphics, level design, and gameplay.

If you loved Ori and the Blind Forest, make sure you check out its sequel, Ori and the Will of the Wisps!