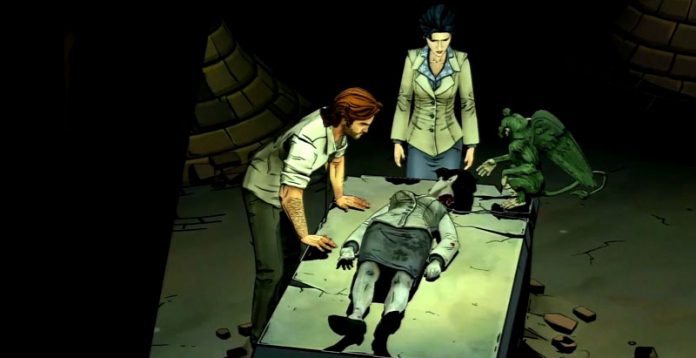 The second episode of Wolf Among Us, Smoke and Mirrors, has just been released and the new revelations are stunning. Most of the murder facts presented during the first episode have been shuttered down and new perspectives are now being considered by Bigby. But that’s just the tip of the iceberg. Much to everyone’s surprise, Snow White is alive and well and there’s a slight chance that Faith is still among the living. Ichabod Crane and Giorgie Porgie are now the two prime suspects in the murder investigation and lastly, Bigby discovers that whoever’s behind the horrendous killing is indeed, obsessed with Snow White’s original fable story. Everything is finally starting to make sense and the truth is no longer as shady and dull as it used to be.

Sheriff Bigby tries to unveil the truth behind the murdering of two fable girls, however this case is everything but an easy one. During this episode, new leads, suspects and motives arise and therefore, a new perspective over the case is formulated. For now, the only solid evidence seems to be the murderer’s strong obsession with Snow White.

Part I: Dead or Alive?

Smoke and Mirrors starts with the clear assumption that Snow White is dead, however what no one seems to know is that Snow is actually alive. The second victim looked just like her but it turned out to be just a cheap glamour spell casted on a troll. Fancy trick you got there Telltale Games, you got us all fooled.

Bigby is captured and interrogated by human police forces but it doesn’t take long until Crane uses his magic powers to rescue the Fable Town’s sheriff. While the two characters drive back home, they talk about the case and Snow’s death – it’s up to players to show empathy or disdain towards the major. Back to Woodland Bigby questions Dee, one of the primary suspects. Things don’t go as expected and players will be forced to make their first major decision in the second episode – force Dee to speak by force or persuade him through a persistent and long speech. Being too nice to Dee will irritate Bluebeard, who will step up and start hitting him in order to obtain more information. The fight will then be interrupted by Snow White.

Major Decision: Use violence or persuasion to get answers from Dee/The Woodsman.

Tips: Your decisions will trigger different actions. If you behave aggressively you’ll have the chance to hit Crane. On the other hand, if you follow Crane’s orders, you’ll have the opportunity to stop Bluebeard from hitting Dee/The Woodsman.

Toad’s son had direct contact with the unknown assassin and he reveals the experienced incident at the river. The child went to swim late at night and realized he wasn’t alone, he went under water and it didn’t take long until the murderer threw a headless body into the water. TJ tells Bigby that he heard someone saying “don’t laugh at me” – was that an act of madness or was a common approach towards someone else, perhaps the murderer’s accomplice? After TJ says he didn’t see anyone or heard anything else, players can choose to let him go home or force him to stay and speak more about the occurrence. However, regardless the option chosen Toad will immediately leave with his son.

Major Decision: Let TJ go when requested or order him to stay.

Tips: Being rude to TJ or frighten him will negatively affect your relationship with Toad.

Snow White was able to retrieve the glamoured corpse that looks exactly like her. After talking to TJ, Snow and Bigby head to the underground chambers to analyze the body. The first thing they notice is that the glamour is defective, which means the caster is someone quite inexperienced working for a possibly black-market glamour business. But that’s not all they discover, the victim was a drug addict, a troll and she was following orders to act exactly as Snow White. She was wearing a magical amulet with Snow’s real hair and a photograph and she was using the same perfume as well.

The lilac flower on her hand is a mysterious evidence piece that will be unveiled later on. The major decision in this part is related to Snow White and the investigation, players can either allow her to come aboard or order her to stay.

Major Decision: Letting Snow come with you or keep her at the woodland building.

Tips: Check every evidence point on Lily’s body since they all hold different, yet meaningful information.

After notifying Holly that her sister has been murdered, Bigby finds out about Lily’s workplace and lifestyle. Living as a fable has become a living hell for the majority. The bad wolf sheriff visits the Pudding & Pie club, where he meets Giorgie Porgie, the business owner. This reckless guy keeps dodging Bigby’s questions and players will have no choice but to resort to violence, breaking some of his precious furniture or tools will make him give you up a record book easily.

This book contains information about Lily’s last appointment with some Mr. Smith (a most likely fictional name) and the hotel room where they’ve met.To know more about Lily’s client and the specific hotel, Bigby talks to Little Mermaid but she uses the same words as Faith, “these lips are sealed”. Apparently, all the workers in this bar are forced to follow a strict conduct that doesn’t compromise the multiple illegalities going on. For some reason, the girl pretends to be meeting with Bigby just to let him know about the Hotel.

Major Decision: Decide which objects you want to break or how many times you want to hit Giorgio until he gives up the book.

Tips: Keep insisting with your questions since Giorgio will always lie to you in the first place.

At the Open Arms Hotel, Bigby discovers Beauty’s secret – she works as a receptionist at a hotel. Beauty agrees to cooperate with the investigation and Bigby starts examining every room on the second floor. In the meanwhile, Beast shows up and he misinterprets the whole situation. He attacks Bigby accusing him of betraying his trust, thinking Beauty is cheating on him. The fight gets really rough but he eventually understands that is not what it looked like. When the two smash 207’s door, a macabre scenario is displayed – the bed is filled with lilac petals and Lily’s blood, it’s obviously the crime scene.

There are endless evidence pieces all over the place and Bigby starts putting them all together – the Snow White book, the apple, Snow’s costume, Lily’s fake glamour, lilac petals…The killer reconstructed the Snow White’s story from the fable book, thus the reason why Lily was forced to disguise herself as Snow White, to role-play and properly fit in the reconstruction of the narrative. Finally, Bigby finds pictures of Crane near a sleeping Snow White – is it really what it looks like? As Crane crushes the magic mirror while watching Bigby progress, it indicates that the major is guilty in some way, if he’s not the killer, then he’s surely involved.

Tips: Try to smash 207’s door while fighting Beast, it’s the only way to make him realize the truth. Examine every lead in the room, each object holds precious information.