Many people consider Duke Nukem Forever as the biggest joke in the history of computer and video games, others ceased to care years ago and others consider DNF to be just a regular title that, as I said before, simply wasn’t meant to be. However, I believe that everybody would expect from a game that was announced 12 years ago to have a short history – tons of stuff to talk about, tons of trailers, videos and details about the plot… well, those would be once again disappointed, since today we have just as few details as we had back in 1998 – maybe even less, since most of us actually forgot what we were told 12 years ago.

Still… a history of Duke Nuke Forever, one of the most memorable games in history (simply because it died a reaaaaaaly slow death before even existing), would be a great thing to have. A short history, as we will see below, and still a fun one: four videos and one image. That’s all we have now.

And it all started in 1998, during the E3, when probably most of the attendees were sure that they’ll play Duke Nukem Forever by the end of the year. Here’s a bit of DNF gameplay:

And then, the Unreal Engine kicked in – better looking and more appealing, it was supposed to be a six weeks long transition that would considerably improve the game. In reality, it lasted three years until the next trailer, which was indeed impressive. Finally, the game was coming!

But again, it wasn’t made to be. The company that had the rights to publish the game shut its doors and the rights were purchased by Take Two who had some plans to change the game once more and improve it even further: as a result, 95% of the content was wiped away. However, Take Two anticipated that by the end of 2003 the game would hit the stores. 3D Realms said that it would actually be “late 2004 or early 2005”. In our reality, it was December 2007 when a really short teaser was released, proving the Duke Nukem Forever was still alive and ready to hit the stores.

Again, it wasn’t meant to be: financial trouble started hitting 3D Realms, the developers shut down only to get resurrected days later, lawsuits emerge and Duke Nukem Forever seems to be forever lost. We get, as a final gift goodbye, another trailer, showing animations and gameplay footage. It would’ve been cool, after all.

But it simply wasn’t meant to be. Duke Nukem Forever, even though existed for 12 years, has a really short history. And this seems to be the last page: 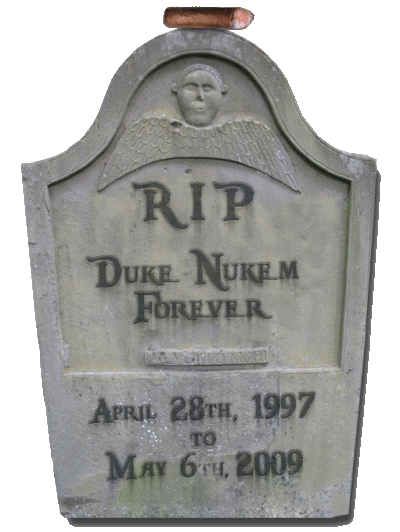