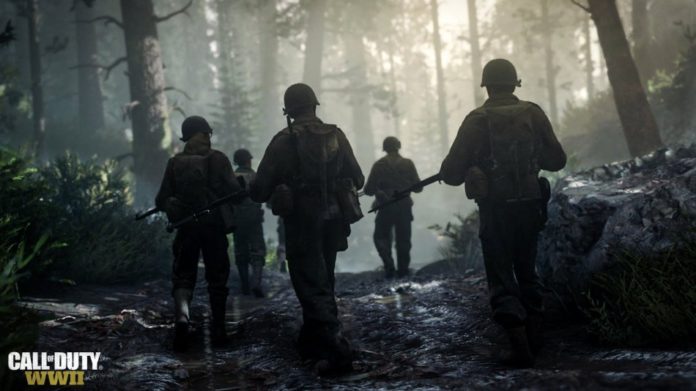 It’s been a long while since we’ve last had a mainstream first-person shooter set in the World War II. Some of us remember the glory days of the Medal of Honor franchise, the early Call of Dutys, all that jazz, and a dozen D-Day landings.

The new Call of Duty by Sledgehammer Games and Raven Software are going to revive the era, following in the footsteps of DICE who brought World War I to gaming.

Let’s take a look at what awaits us in Call of Duty WWII when it launches later this year.

The Call of Duty franchise has gotten us used to singleplayer campaigns across 14 years of its existence, and it comes as no surprise that the new entry has one as well.

It is going to put you in the shoes of one Ronald “Red” Daniels, a young man from Texas joining the fray in the European theatre as a new addition to the famous 1st Infantry Division, also known as The Big Red One.
During the campaign you’ll play through the D-Day Omaha landing in Normandy, a gaming experience possibly unknown to many of the younger players. You’ll also participate in the actions of the French Resistance, make your way towards Berlin, even impersonate a German soldier along the way, in a mission reportedly different from any other in the game.

It appears that the developers seem determined to provide a gripping story and exciting gameplay, but are committed to paying proper respect to people who fought and died in the conflict.

Interestingly, CoD WW2 ditches regenerating health in favour of classic health kits, although this change is reportedly limited to the singleplayer, multiplayer is back to the modern standard of healing factors and bleeding eyes.

Although the serving of your usual Team Deathmatches, Dominations, and Capture-the-Flags is not going anywhere and will be available at any time, CoD WWII may have struck gold with its new mode, which has the potential to be as much of a hit as Battlefield 1’s Operations was.

It’s called simply War mode, and it’s going to be all about multiple-stage defend-attack objectives, and an underlying narrative directing the flow. Reports speak of several interesting segments. One of them is Payload-like part, where you help a tank move along through a hostile territory, for an additional benefit of having cover and a mobile machine gun to occupy. Another bit repeating across reports is building a bridge, which requires holding a strategic point to contribute to construction efforts, visualised as parts of the bridge floating in to their proper places when your teammates are on the task.

Each map in the War mode is going to feature a mix of objective-based modes in an effort to promote teamplay and contributing to the overall efforts in a meaningful way, instead of just caring about personal score.

Of course it remains to be seen how it plays out after launch, but the mode is very promising and introduces more deliberation into twitch shooting commonly associated with Call of Duty.

We’ve already mentioned the first of significant changes to the game in the form of non-regenerating health in the singleplayer campaign. Sledgehammer clearly decided that it would harm the tension and the integrity of the narrative and switched to medkits. Leaving the healing factor in in the multiplayer, however, will likely make for a more dynamic gameplay, which is essential, since the other big change is likely to cause some discord among the playerbase.

That other big change is a slower and less… fanciful movement. After all the Titanfalls and Infinity Warfares and what have you, being stuck to the ground, getting tired after going into even a brief full sprint, and no fancy parkour might seem like a travesty to some. The developers have been saying since the beginning that the new Call of Duty is going back to the “boots on the ground” approach.

The Zombie mode is also returning, a long-running tradition of CoD its own right. Dubbed Nazi zombies it will very likely ditch the rather silly, cheesy style of previous inclusions and go for a more sinister mood. Rest assured, though, it will probably still involve killing hordes or undead flesh.

Call of Duty’s return to its roots might be a very smart and refreshing move, especially after a lukewarm at best reception of Infinite Warfare. It remains to be seen how well they manage to handle the time period in a more involved, humanised kind of singleplayer campaign (instead of tabula rasa characters in the past), but it can result in something really interesting. The War mode is very promising as well.

Could it be that Call of Duty WWII will become one of the franchises high points? It’s very likely. The game launches on November 3 this year, leaving just a little more than a month to get your pre-order if you find the premise (and promise) interesting.

Will we meet on the frontlines?