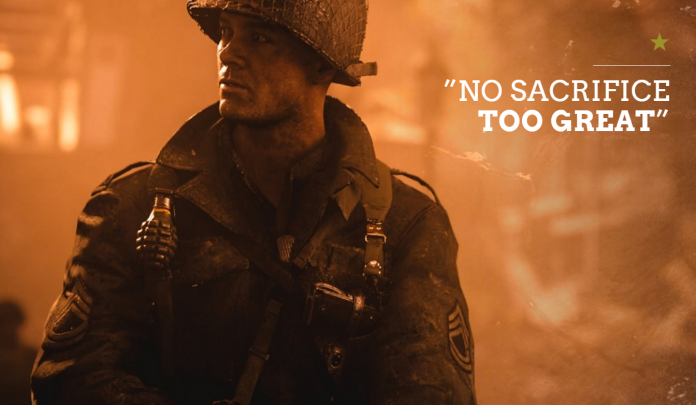 “Welcome to the Bloody First.”

Following Infinity Ward’s Call of Duty: Infinite Warfare last year, Sledgehammer Games’ takes their turn this year with the official announcement of the next game. We’re going back to World War I this time around, a sharp turn from the futuristic direction Infinite Warfare took. Are you ready to storm the beaches of Normandy once again?

Fans have been quick to point out that the player character is a part of the 1st Infantry Division, hence the Bloody First motto. You can also see the Big Red One patch on their uniforms, so a lot of old school fans of the series are pretty excited at the prospect of characters from Call of Duty: Big Red One making appearances. Or even better – could this game actually a potential remake of Big Red One?

Sledgehammer Games has said that they’re designed this game to be more grounded and realistic, another constrasting attritube to the previous Infinite Warfare. It’s heavily implied – from the trailer and Sledgehammer’s comments – that the game is going to be heavily focused on the camaraderie of your fellow soldiers. The game is going to go great lengths to show the true horrors of World War II, which will only serve to reinforce the bonds the protagonist will form.

The game is also taking some dramatic shifts in terms of gameplay as well. Automatically regenerating health is no more; taking a hit has serious consequences now. To recover health you’ll need to actually talk to your medic and ask for help. This goes double for ammo, as teammates will have to supply you with more if you run dry. This is a pretty interesting change as a lot of modern first-person shooter players have gotten accustomed to health regeneration just being a staple of the genre. I’m excited to see what other changes to formula they’re coming up with.

Call of Duty: WWII is scheduled for release November 3rd, 2017 for Xbox One, Playstation 4, and PC.