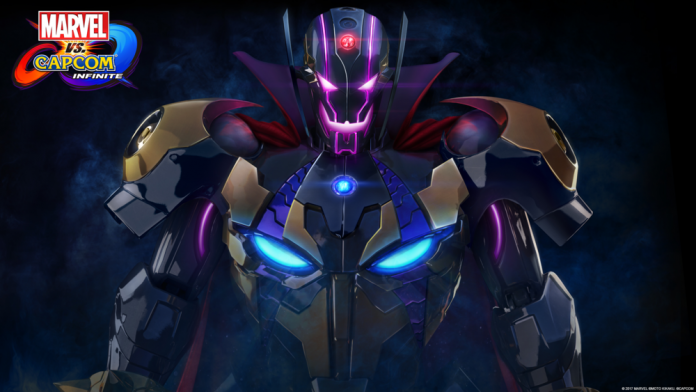 Following Marvel Vs. Capcom: Infinite’s reveal trailer back in December 2016, the game was quiet for some time… until now! The official Playstation Youtube channel uploaded a new trailer today. This video is the first of the story trailers, a set of cutscenes detailing the new and improved story mode of the game.

Right off the bat, two very familiar figure are shown pacing around each other. They are none other than Marvel’s own cybernetic supervillian Ultron and Capcom’s Maverick-with-a-lightsaber Sigma. The two mutually agree that all biological life must be destroyed – because we all know that’s what robots strive for – and quickly set their plans in motion. The two supervillians fusing into one mechanical monstrosity, so we’re going to need the combined power of heroes from both dimensions. And thus, Marvel Vs. Capcom: Infinite ignites the epic clash once again.

During the December reveal and gameplay trailers, we saw Ryu, Mega Man X, Morrigan, Iron Man, Captain Marvel, and Captain America in action. This time we get to see Chun-Li, Strider Hiryu, Chris Redfield, Hulk, Thor, Hawkeye, and Rocket Raccoon join the fray. At the end of the trailer there’s a short spot showcasing Sigma (unfused) as a future DLC character, with five more characters planned. With the exception of X, Captain Marvel, and Sigma, these are all returning characters with many of them being in 2011’s Ultimate Marvel Vs Capcom 3. In the coming months I’m sure we’ll hear more about the base and DLC characters.

The very end of the trailer reveals that there will be three versions of the game at launch. First up is the obvious regular edition that has pre-order bonuses (costumes for Thor and Ryu). The second version is the Deluxe Edition which will come with the season pass that nets you the six DLC characters. The third and biggest edition is the Collector’s Edition, which has everything the other two editions have plus character dioramas of Mega Max X, Iron Man, Captain Marvel, and Chun-Li. You’ll also get a sweet looking box containing replicas of the six Infinity Stones and a steelbook case of the game.

Marvel Vs. Capcom: Infinite launches September 9th, 2017 on Xbox One, Playstation 4, and Steam.