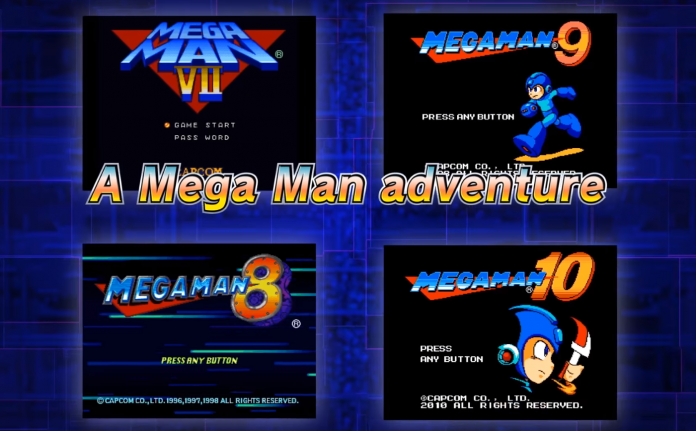 Finally, Capcom is giving everyone’s favorite pea-shooting blue robot some love! Mega Man Legacy Collection 2 is the sequel to the fantastic collection that contained all of Mega Man’s NES adventures. Have a look at the trailer!

Mega Man Legacy Collection 2 will pick up right where the last collection left off. The first game in the collection will be the SNES classic Mega Man 7, the blue bomber’s jump into the 16-bit era. This game marked the first appearance of powerful rival Bass and his robotic wolf Treble.

The second game in the collection is Mega Man 8, debuting the series on a non-Nintendo console (and 32-bit at that) for the first time. Created to celebrate the 10th anniversary of the series, Mega Man 8 is a pretty standard Mega Man game. There are no new mechanics here to experiment with – it’s just good old classic Mega Man run’n’gun fun.

The third and fourth games in the collection are Mega Man 9 and Mega Man 10. Released in 2008 and 2010 respectively, these games were deliberately created in the 8-bit style despite being released on modern consoles such as the Xbox 360, PlayStation, and Wii. Originally done as a fun throwback to the original games, Mega Man 9 actually performed so well Capcom went ahead and did a sequel. Mega Man 10 is the first and only game to feature all three heroes – Mega Man, Proto Man, and Bass – as playable characters.

These games left such a mark that it’s arguably the spark that fueled the resurgence of retro-styled games that would follow, and now you get to experience them again or for the first time! In addition to the standard game experiences, there are also Remix Challenges that add in new stages for you to play through. Each stage records your time, and you can compare your scores to other games across the globe with the online leaderboards.

Like the first Legacy Collection, there’s also a Museum containing lots of design goodies for Mega Man. There’s concept artwork to gawk at and a jukebox that let’s you listen to the fantastic tunes of the games.