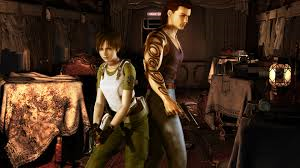 Capcom has announced that it will be remaking Resident Evil Zero, following the success of the remake of the original Resident Evil, the remaster of which sold 1 million copies.

Resident Evil Zero will be remastered with help from people who worked on the original project back in 2002, including Koji Oda, the original director.

Originally a GameCube exclusive before being remade for the Wii, the game will be coming to non-Nintendo platforms to the first time, with a release slated for early 2016 for PC, PlayStation 3, PS4, Xbox 360 and Xbox One.

Specific details are rather scarce at the moment with new information coming soon, but it is likely Zero will receive the same treatment allowed to Resident Evil. This means we could be seeing 1080p visuals as well as improvement in the games textures.

Resident Evil Zero, a prequel to Resident Evil, saw the focus on officer Rebecca Chambers and escaped convict Billy Coen. The game was notably set on a runaway train and featured a ‘partner-zapping’ system which allowed players to switch between the two lead characters at any given moment.

You can take a look at the reveal video below:

What did you think of Resident Evil Zero and do you think it deserves a remake? What games would you choose to be next?