It’s a good time to be a Monster Hunter! Monster Hunter XX (pronounced double cross), the expansion pack sequel to last year’s Monster Hunter Generations, has been confirmed in an official Capcom tweet to be getting a port for the Nintendo Switch! 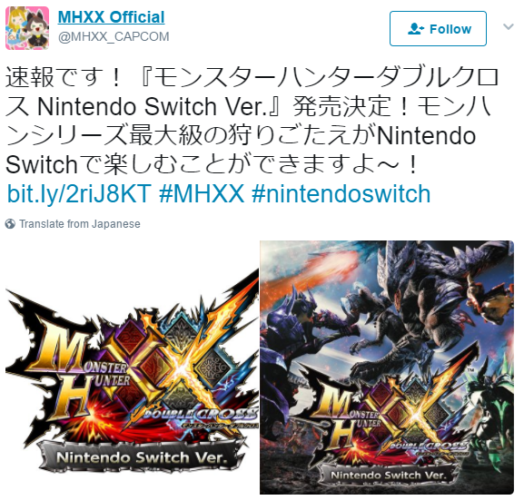 While we definitely can’t read Japanese, the message is clear – Monster Hunter XX is coming to the Switch! There’s no confirmed word yet but we’re thinking that the chances of a Western localization is high, probably under the name of Generations 2 or something like that. Although, they’re probably going to give it some nifty subtitle, like they did with Monster Hunter “Tri,” the third game in the main series.

According to Nintendo Everything, more details about the game will be revealed during the Monster Hunter Championship 2017 this coming Saturday. A couple things – I had no idea there was a Monster Hunter Championship. And I call myself a huge fan!? Second, that’s surprisingly soon, but that’s only further evidence that a localization is inevitable. The hype surrounding the Switch is still very much alive, and considering Mario Kart 8 Deluxe sold extremely well despite being an enhanced port, Capcom would be silly to pass up this opportunity.

You can visit the official Monster Hunter XX Switch Edition website, but much like the tweet it’s all in Japanese. There’s not much to look at at the moment anyways, with the only detail pointing towards May 27th, the day of the Championship. Stay tuned – we’re really hoping for an announcement for this game during Nintendo’s E3 presentation this year!