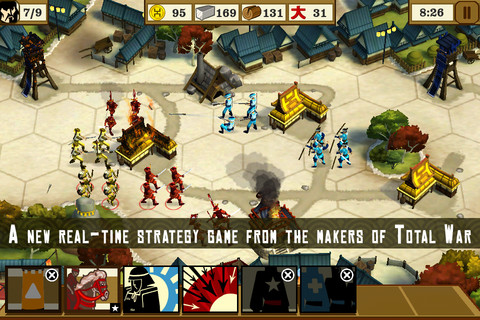 For the strategy loving gamers out there that wish to get a bit of mainstream, hardcore gaming on their iOS operating devices, Total War Battles Shogun is the game that you simply must purchase – and the title should be enough to tell you why.

Created by the same team behind the Total War series, Total War Battles: Shogun delivers quick-fire, tactical combat balanced with intuitive building and unit management set in Medieval Japan and ready to challenge you to the bone.

Expect to get in this iOS game, except for some really beautiful graphics, more than 10 hours of story-driven campaign modes, a unique take on the real-time battle mode, touch-screen specific controls that make gameplay much more fun and 1vs1 multiplayer battles. In other words, Total War Battle Shogun delivers a complete and complex game experience like few other titles on the iPhone and / or iPad do.

So if you are a fan of the series or you simply love challenging strategy games, you owe it to yourself to get your hands on Total War Battles Shogun. So click the links to head to the iPhone version of the game or the iPad version. And have fun conquering Medieval Japan on your smartphone!