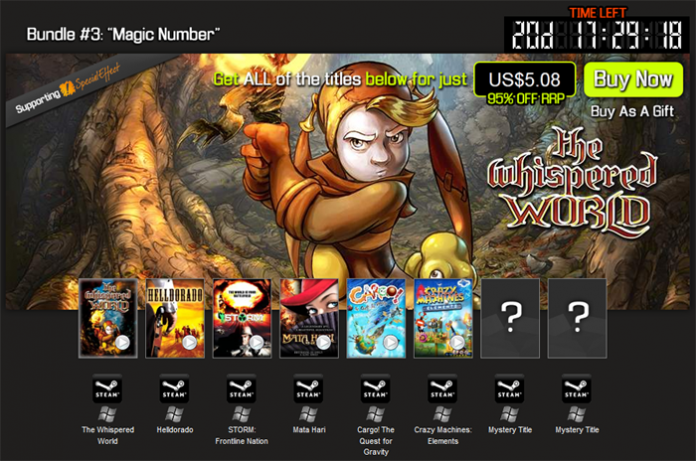 Lately it seems you can’t take two clicks on the internet without catching wind of a new bundle of heavily discounted, or free, games; these games are usually of indie origin or are simply lesser known titles that have managed to fly under the radar. Most of these bundles sport a “pay what you want” purchase model and oftentimes the bundle’s proceeds go to charity. This current trend most likely started due to the wild success of the ‘Humble Indie Bundle‘, and now it seems that every week there is a new compilation of games tugging at your heartstrings and clawing at your wallet…not that I’m complaining.

One of the more recent “bundle services” to enter the foray of the internet is Bundle Stars; much like the humble looming giant of the bundle scene, all proceeds go to the developer or to charity; specifically, Special Effect, a charity devoted to helping individuals with disabilities play and enjoy video games. Bundle Stars was founded just a few short months ago, and yet it is quickly climbing the ranks as a go-to destination for great game deals.

The ‘Magic Number bundle’ is the third assortment of games from Bundle Stars, and it boasts an insane discount of 95% off the retail price: that’s just over $5 for eight games. As of writing, only six of the eight games featured have been revealed and can be played immediately following purchase; the other two games will be added before the bundle expires and will automatically be added to your account. The games that are currently available are: The Whispered World, Helldorado, Storm: Frontline Nation, Mata Hari, Cargo! The Quest for Gravity, and Crazy Machines: Elements. All of the games are for Windows and are redeemed through Steam.

The ‘Magic Number Bundle’ is available for the next 20 days, but if one bundle simply isn’t enough for you, you’re in luck; Bundle Stars’ previous two bundles are still available for purchase so they certainly provide a large bang for your gaming buck.

And if you STILL can’t get enough bundly goodness, why not check out ‘The Free Bundle’ which, as the name implies, is absolutely free!