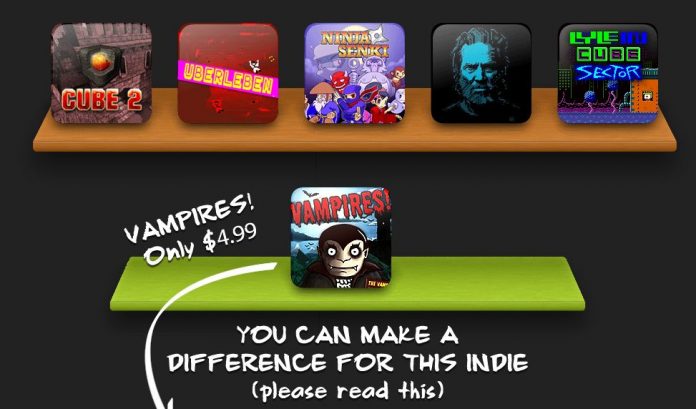 I was pretty excited earlier this year when my ears received word of “The Free Bundle”, a website dedicated to shedding some light on a few of Indie gaming’s lesser known gems. Modeled after the incredibly successful Humble Indie Bundle, The Free Bundle takes a group of five indie titles each month and gives them some of the recognition they deserve. We are now on the third iteration of the titular bundle, but things are slightly different this time around.

Apart from the usual free games that occupy this web space, which I will discuss momentarily, is the addition of a game called Vampires! by Jan Kavan; the difference here is this game isn’t free but comes with a price tag of $4.99. However, this is by no means a cash grab on the part of the CabreraBrothers, The Free Bundle’s creators, or by Kavan himself; as stated on the website’s front page, this is simply a way for members of the indie dev brotherhood to help out one of their own who has fallen on rough times. Here’s an excerpt from the post explaining the situation:

“As you may know Jan Kavan, the guy behind fabulous J.U.L.I.A, Vampires! and other titles had a big problem with a publisher…We need more devs like Jan around to keep us entertained and without income, that won’t happen.”

Really $4.99 isn’t an outrageous sum to fork over for a game, especially when the game in question looks like a pretty entertaining way to kill some time. Vampires! is an action-puzzle game where you help a group of moronic vampires avoid cannons shooting balls of light, stake traps, and various other vampire banes as they make their way to their tombs before the sun rises. I can see a few people taking issue with the commercial promotion of a game on a website called “The FREE Bundle”, but I personally don’t see anything wrong with helping a struggling indie dev make some extra scratch so he can keep producing great games.

If, however, you’re uninterested, or simply too poor, you’re far from out of luck; The Free Bundle 3 still features five excellent indie games for the nominal fee of absolutely nothing. These games are: Cube 2, a manly singleplayer/multiplayer FPS in the vein of Quake 2; Uberleben, a 1-7 player survival skydiving game with pixel graphics, and kickin’ techno; Ninja Senki, an 8-bit-esque ninja platformer about justice and revenge; Armagetron Advanced, a Tron inspired light-cycle game in 3D; and Lyle in Cube Sector, a pixelated, cat saving, metroidvania platform that looks like a forgotten NES game.

All of these games look to be all sorts of awesome and I can’t wait to give each of them a try; I’d highly recommend you check them out too. Personally, I’ll be playing Ninja Senki first; it looks downright amazing!