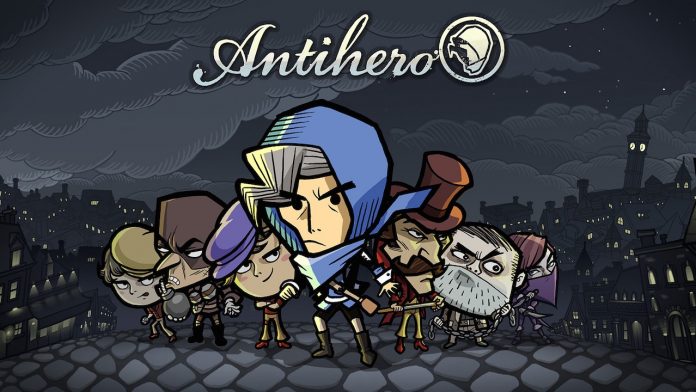 “Whether above the law or below it, everyone was a scoundrel of some sort.”

Antihero is a stylistic turn-based strategy game with a very distinct “board game” feel to it. Sporting a charming yet effective art style, Antihero puts you into the shoes of a Master Thief. You’ve got a Thieves’ Guild to run, and we all know that thieves orbit around one thing and one thing alone: money! To run a successful guild, you’ll need to balance your power around the city and make sure you’re upgrading your own Master Thief to make sure they remain a formidable foe.

There are three main modes in Antihero; the campaign has you play as Lightfinger, an established Master Thief with quite the reputation behind his name. There’s also online multiplayer of course which lets you out-thief other Master Thieves around the world. There’s also the free-play mode Skirmish which lets you take on a random AI opponent. Something neat about the online multiplayer mode is that it lets you play a normal game or a “casual” game. In normal mode each player has a time limit during their turn, while casual mode disables the time limit. You can even save the game and come back to it later, and the game can even e-mail you when it’s your turn. Neat! 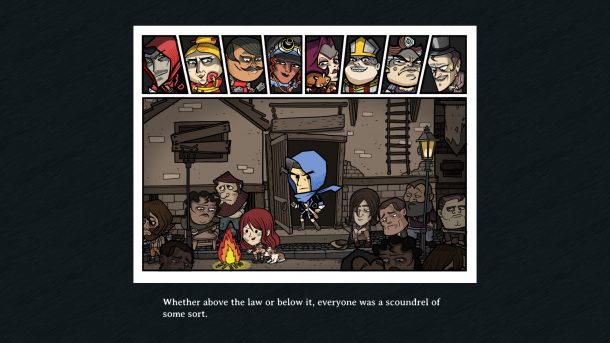 Getting right down to it, Antihero is a meticulously played out game of counters. There are two main resources for you to collect: gold and lanterns. Gold allows you to hire new type of units that can help your guild out in some way while lanterns can buy you upgrades to your Master Thief and allies. Upon starting a new map, the town will be shrouded in dark clouds. You’ll need to order your Master Thief to scout locations – this reveals the area to both players.

Revealing districts will often times also reveal businesses. Business buildings, designated by the banner above them, will either generate a resource for you over time or grant you some kind of helpful passive bonus. In order to activate these businesses, you’ll need to hire Urchins, mischievous youngsters who are willing to work to make some coin. Once you send an Urchin to infiltrate a business, you’ll start reaping the benefits. Each business has up to three slots for Urchins, and filling all slots up will increase the bonus you get. For example, the Banks will generate one gold for you each turn, and if you have three Urchins occupying one, you’ll get three gold instead. 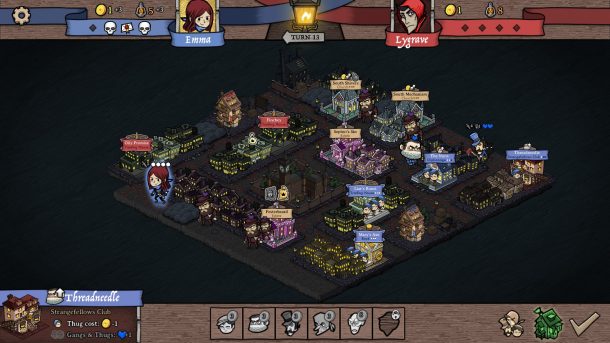 To win the match, you’ll need to acquire a certain number of Victory Points, which can be gotten in a variety of ways. If you’ve got a hefty amount of lanterns, you can buy bribe points directly from your Thieves’ Guild. Occasionally, wanted targets will start wandering around the town. Assassinating them will also grant you a Victory Point. Finally, infiltrating a Church with three Urchins will produce a blackmail point for you, which counts as a Victory Point.

As you can see, there are a number of ways to go about becoming the better thief, but the whole thing requires very careful balance. Eventually both you and your opponent will be able to hire Gangs and Truant Officers. Both of these units are able to evict Urchins from businesses, allowing either player to deny the other certain bonuses and resources and even take it from them! 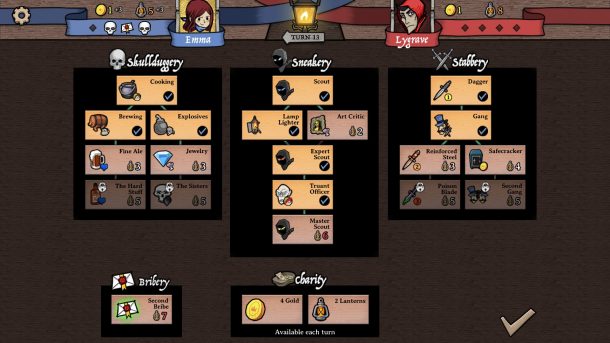 You’ll need to make sure to expand your base slowly but surely, and to cover all of your bases. Expanding without protecting your prior businesses will poke holes in your overall plan, so you need to be careful and make every decision count! Remember when we said this game is all about countering? Each decision you make that foils your opponent’s plan puts you one step ahead, and it just feels awesome to know you outsmarted your opponent after a crucial decision.

Because the turns play out pretty fast, the action in Anithero will always keep you on your feet as you think of your next game plan, and the little things that play out between turns keeps things funny and fresh. The animations of each hero are very charming and memorable, and each unit type is very distinguishable from the others. They even have their own unique voice lines which only adds to their personalities.

Antihero is an addictive and extremely satisfying strategy game with a lot of depth than it seems at first glance. The simple yet charming aesthetics of the game will draw you in and the deep and complex game play will make you stay.