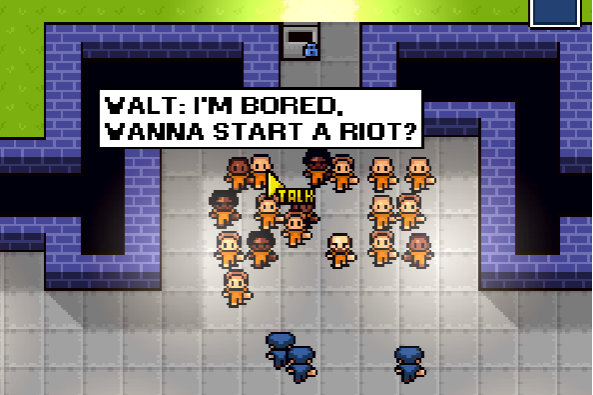 The indie developer of Spud’s Quest, Chris Davis, is working on a new project entitled as The Escapists. This upcoming crime game for PC will allow players to plan and execute their ultimate prison breaks, as the company stated:

The developer of the Kickstarted indie adventure Spud’s Quest has just announced his next project. It’s called The Escapists, and it will attempt to breathe life into the dormant prison break genre. The game puts you in the shoes of a prison inmate, daily adhering to the strict prison schedule but with the ultimate goal of planning and executing an escape.

The Escapists will introduce a dynamic and interactive system, where physical strength and intellectual skills play a decisive role when it comes to escape high security prisons. While being imprisoned, players should spend their time in useful ways; boosting their stamina or learning new strategies to escape might be handy in the future. The social network maintained inside the prison will be a major factor in The Escapists as well. If players behave rudely towards guards and hostile gangs, they’ll most likely get into deep trouble.On the other hand, if they behave correctly and nicely, the chances to get free assistance will be greater.

Crafting will be one of the most intriguing features in this upcoming title, since players will have to collect whatever they can find around the prison and build their own tools and weapons. The most standard escape is by digging a hole intot he cell’s ground, however that’s not an easy plan to implement. Hiding the excavation until it’s complete is a serious challenge; getting rid of the dirt and sand is another trouble that needs to be dealt with as well.

The Escapists is scheduled to come out next year.