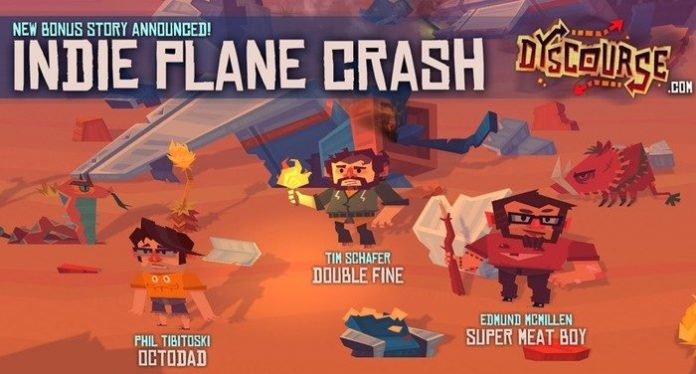 Dyscourse is a game about survival. It is a game that puts the player into a group of survivors from a plane crash. Using the element of choice– the player must try and survive while getting along with the rest of the group. It has now been revealed that this indie title, will contain a bonus scenario called – Indie Plane Crash. The following list of people will be featured:

This group of famous Indie folks, will have to try and survive in the very same manner as the people in Dyscourse’s original campaign.

Alex Schwartz, Chief Scientist at Owlchemy had the following to say about the scenario:

“They can code, but can they catch cod? This additional scenario will explore what happens when these stars of the indie scene have to sleep under the big sky, fighting the elements and potentially each other to survive until rescue.”

To me Dyscourse seems like an adventure game that really makes the player think outside the box. According to the dev-team (Owlchemy), the choices that the player makes– will branch out to yield more results than that of other games. It seems like a really grand Idea, let’s just hope that Owlchemy can pull it off.

Dyscourse is set to launch in 2014 for PC, Mach and Linux. The dev-team has made a deal with Valve, that allows everyone who supports the games Kickstarter, to get a Steam key.

The Kickstarter can be found here.