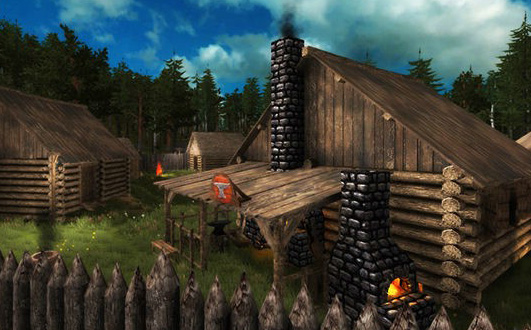 The independent games developer, Bitbox, officially announced today the development of its newest creation Life is Feudal, an upcoming medieval MMORPG. This project has been going on for nearly 3 years, however the worldwide release is scheduled for 2015. Life Is Feudal will challenge players to return to their origins and survive at any cost, as the company mentioned:

Ever wanted to go back in time and thrive and survive in medieval times? How would you survive? How would you fend for yourself? Where would you live, and how would you defend against players and predators from the wild? Could you build a peaceful community to live in, and would you even if you could? Because ‘Life Is Feudal’ is an open persistent virtual world, players can roam around freely without restrictions. (…) An important feature in ‘Life Is Feudal’ is its highly advanced and impressive skillcap-system, in which players can use any combination of skills adapting to their preferred choice of gameplay.

This upcoming MMO promises to deliver a new level of immersion and innovation in order to create a true next-gen virtual world. The alternative combat and crafting system will allow players to create unique characters, with exclusive and customized builds. There will be 25 primary crafting skills, 25 primary combat skills, 5 secondary crafting skills and 5 secondary combat skills. As the company stated “the depth, complexity and level of detail is endless.”

The world of Life Is Feudal will be very dynamic, in order to conquer other lands players can invade and conquer enemy kingdoms. Siege and massive wars will be part of the daily life of this upcoming title. The combat system will test players skills and swiftness, there’s no target combat system a sit happens in most MMORPGs today. Bitbox explained that players “must carry out individual actions such as swing, stab and block” in order to successfully defeat their opponents.

Life Is Feudal will include several mini games within the main world “that adds immersion and fun to the medieval crafting process”. Bitbox unveiled Life Is Feudal’s access system, which will combine free-to-play and buy-to-play in a hybrid system.