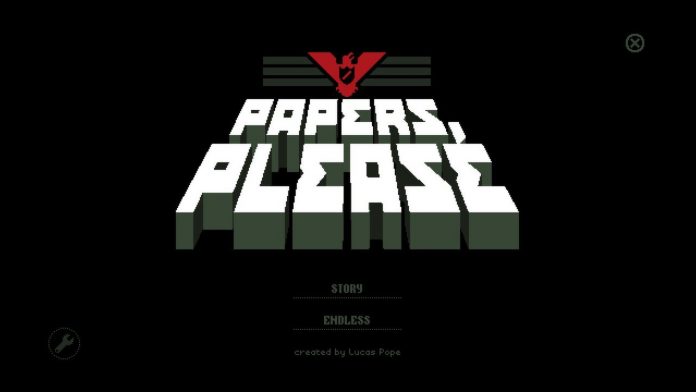 Papers, Please is a recent graduate of the Steam Greenlight program. The makers proclaim it to be a “Dystopian document thriller” that takes place in the proud communist state or Arstotzka. Although this may not sound like everyone’s idea of gaming Nirvana it has plenty of merits and a Metascore of 85 (8.7 user score!) that should be enough to justify a closer look.

For starters, playing the game is an incredibly rewarding experience and manages to situate the learning curve quite majestically so as to re-engage the player as the complexity increases. From simple beginnings inside the Passport booth at a border checkpoint you are tasked with checking the validity of applicants travel documentation……No seriously, that is what the core game-play consists of. From this seemingly mundane starting point you traverse into a World of ever increasing intrigue which includes bribery, Moral decay and a mystical order that claims to be saving your proud state. As if your life at work was not complicated enough when you return home at the end of the day you have to worry about assigning your wages to feed/heat/look after your extended family.

Before touching on the interesting moral conflicts that arise let’s try and boil down what playing the game actually entails. The crux of it is cross referencing and checking data. You have a rule book at your disposal which is used as a reference point when interrogating potential migrants, or to check on any information that may be included in a person’s passport or other travel documents. After examination of said documents you can either deem the applicant suitable for entry and grant them a visa, or break out the dreaded red stamp and reject their application, along with any chance of a better life…

This game is engaging on such a level that after playing for a few hours I had a break and took my dog for a walk. At one point I found myself reaching in my pocket and my fingers stumbled across a piece of paper I had no memory of. Now this only lasted a microsecond but in that tiniest of windows my brain wondered if it was some item I picked up from my desk in game. I caught myself doing this and in disbelief I conceded that either I was losing my mind at the age of 27 or just maybe, this game had got in my head. 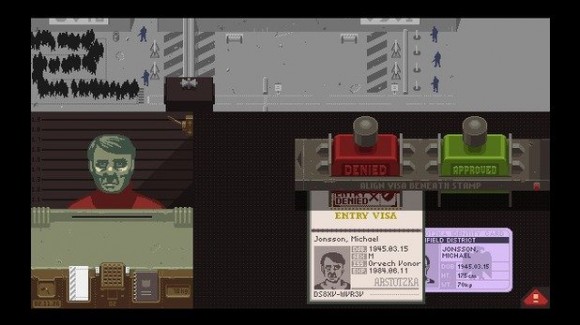 Having tried to dissect how such a simple looking game could have such an impact on me I came to the realization as to just how well made Papers, Please is. Firstly, you are forced to engage your brain and work through applicants with differing degrees of scrutiny. Each day brings a new challenge and potential for new complications. By day 30 I was cross referencing 4 separate documents whilst keeping an eye on a criminal watchlist, at the same time looking out for people jumping the border, alongside handing business cards to suitable candidates, all the while looking for a guy in a red coat to slip some poison. And in truth the list goes on further but I’ve run out of conjunctions to adequately list them. Once entry is granted there is a fateful few seconds where you wait and see if you are issued a citation that lists your errors, or get to enjoy the blissful silence that follows accurate processing.

The moral aspects of Papers, Please intrigued me. I started off taking the job very seriously and despite sick relatives, husbands trying to get to wives, and mothers trying to reach sons I did not relent. But as you progress you must house, feed, and heat your family, the cost of which is too much to bear. By the end of the game I was taking bribes and working for the rebel order which culminated in me sacrificing my life to ensure the future of the republic. It is an odd journey in which you are forced to make various sacrifices (sometimes human) and as time ebbs on the temptation to make increasingly scrupulous decisions can become overwhelming. It is because of all these factors and many more that result in me recommending Papers, Please with absolute confidence. IT is the most fun I’ve had on an Indie game since “Faster Than Light”, and if you haven’t heard of that either then buy both games and thank me later.