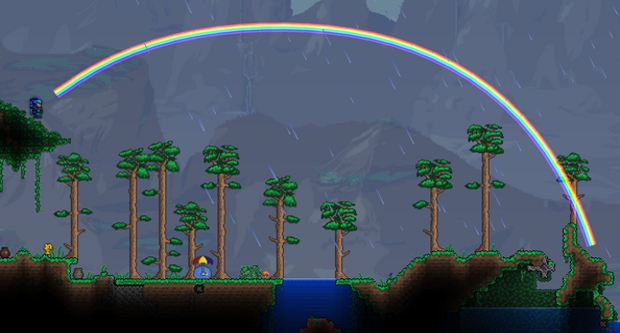 This has been a great week for fans of the sandbox game Terraria. With the 1.2 being released Tuesday, news came from the website Rock, Paper, Shotgun in the form of an interview with Redigit himself. The developer, who’s real name is Andrew Spinks, has finally revealed the project he left Terraria for was in fact Terraria 2. He also revealed that he came back to the original game to give fans the 1.2 update. Spinks stated he was really excited about Terraria 2, and looked forward to expanding the universe and what you can do with in-game:

“There’s a lot of stuff I’m locked into with Terraria. The way loot works, the way character progression works. In Terraria 2, I really want to have infinite worlds so you’re not just stuck to one world. You can travel anywhere. I want more biome diversity in that, too. There’s a lot of stuff [I want to add and change].”

Spinks also answered a couple questions about the future of the original Terraria. He said that 1.2 would be the last “seven-month update” to the game, but he had plans for some smaller updates. Spinks said he wanted to work on finishing the endgame progression in the next couple months, with a possible Halloween update, among others. On the same subject he said:

“It’s a tricky question, though. When do you stop working on one game and start working on something new? I honestly have no idea. Right now, I’m having a lot of fun with it. Everyone on my team is really enjoying working on Terraria 1. But I have looked into maybe hiring another small team to continue updates while I move onto Terraria 2. So that’s also an option.”

Regardless of what Spinks and his team decided to do, Terraria 2 will most likely follow in the steps of it’s predecessor. Keep your eye here for more Terraria and Redigit news as it becomes available.