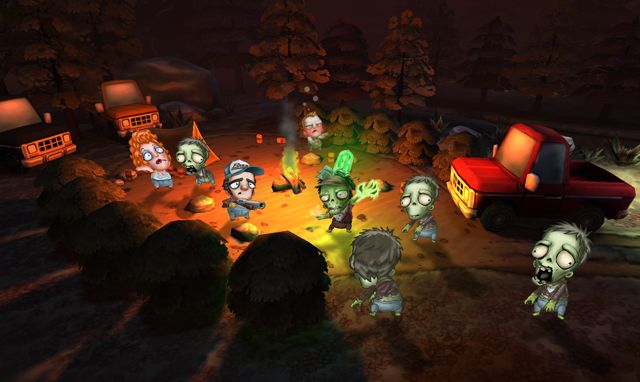 Ragtag Studios is hard at work on what they’re hoping is a refreshing take on the zombie genre. Their new title, Ray’s the Dead, pits the gamer in the role of the living dead. And they’re asking for your help to make it happen.

Ragtag has taken to Kickstarter to seek help in funding their new project. Its brief description reads as “a story driven, action-stealth-puzzler where you create and control your own zombie army!” The story summary states the following:

“When a random bolt of lightning strikes Raymond La Morte’s grave he suddenly finds himself resurrected as a zombie.  A zombie with a few unique features, namely, he has a spark of intelligence and a giant light bulb protruding from his brain. He has awoken frightened and alone in a once familiar world that has become strange and frightening yet filled with wondrous new possibilities. The 1980s is coming to a close, it’s been an era of big hair, big music, and cold war.  It’s been a decade in which anything could and did happen. Now here in an out of the way graveyard a new beginning emerges.”

The developers are making promises of a compelling narrative. Stating that throughout the adventure we’ll be uncovering exactly who Ray is, how he met his demise, and what exactly the giant light-bulb is that is protruding from his head.

Ragtag states in the Kickstarter trailer that they draw inspiration from Stubbs the Zombie and Pikmin, the latter which they label one of their favorite games of all-time. And the gameplay resembles the tiny plant army simulator quite a bit. Throughout the video you can see the clear inspiration as Ray commands his zombie minions to do his bidding much as Captain Olimar did his Pikmin friends.

Check out a video below:

The art style is refreshing, the gameplay looks fresh, and of course you get to be the zombie in this outing. What more could you ask for? Ray’s the Dead is hoping to launch by the end of 2013. There is currently 31 days remaining in their Kickstarter campaign and they’ve raised nearly $10,000 out of their $75,000 goal. Take a peak for yourself and if interested lend your support. Maybe Ragtag Studios can get Ray to the land of the living.