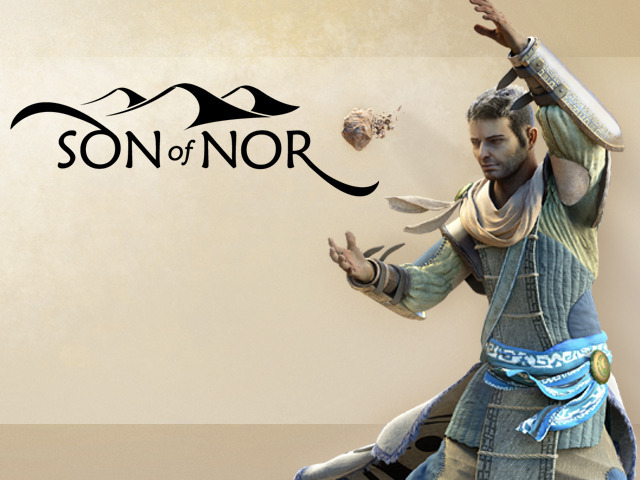 A while ago, during my short and foolish foray into gaming (and boy was it foolish) I spent a lot of time seeking help and inspiration on the Unity 3D forums. It was there, whilst I was looking at works-in-progress that I discovered a game; Son of Nor. It was rough. The models barely looked human, and they walked strangely. The world was blocks of orange squares and a coarse looking ground meant to represent sand. But at it’s core, the idea, and above all, the gameplay, looked excellent. Over the following weeks I kept my eye on it’s development, fed to me through weekly developer diaries. Over time, as I spent less time on Unity, my enthusiasm for he project waned, before piquing again when their Kickstarter campaign earned them over $150,000 (!), and then again when the game was greenlit through Steam. I realised that what I had discovered by accident, and that it’s rough outer exterior, had grown into something admirable; an indie game that looked like it was on its way to stardom. The sort of fame that other successful indie titles have earned.

Son of Nor is an indie action/adventure game with a unique power; terraforming. But I won’t be telling you everything about it.

Fortunately for me, the guys over at Still-Alive studios are pretty decent, and when I got into contact with them they agreed immediately to answer my questions.
My responses came from Chris Polus, an original member of the studio, whose main job is to create sounds for the game. But if you visit their site and see lots of pretty pictures, and lots of updates, that’s Chris’s input too.
Without further ado…Son of Nor.

What makes Son of Nor so different from other games?

I think the unique feature of Son of Nor is the category of special powers you wield in the game. Your character has the ability to manipulate, lift, and throw physical objects with the power of his/her mind (telekinesis). The strong connection to desert sand makes players able to shape it, pile up or lower the sand (terraforming).

These two abilities are not just for show. As humans don’t have access to weapons in the world of Son of Nor, players have to use what they’ve got: the environment. Unlike in other games, a rock is not only to hide behind to avoid enemy fire. With telekinesis you can pick it up and throw it. If there are no rocks to hide behind, you can pile up sand and hide behind the terrain you shaped. This combination of powers is not an afterthought or gimmick. This is the essence of the game mechanic: the world is your weapon.

The third power you have in Son of Nor is different types of magic. These types can also be combined to create new magical effects: cast wind onto fire and get a powerful fire tornado! Since the world of Son of Nor is based on physics where possible, we created many phyiscal puzzles during your adventures. Burn down wood constructions with a fire spell, drive a sail mechanism with a wind push spell, infuse rocks with fire and create a potent fireball.

This is what makes Son of Nor’s game idea really unique.

What can we expect in Son of Nor?

Son of Nor is an action adventure. We went through great lenghts to create an intriguing story that makes you want to know what happens in the desert world of Noshrac (the name of the continent Son of Nor plays on). And we went for a cool combination of action packed fights on one hand and puzzle solving by using all your special powers (telekinesis, terraforming, magic) on the other hand.

Tell us a bit more about the terraforming and telekinesis, and how these play into combat.

There are no magical shields, no armor to pick up. You don’t run over a yellow glowing breast plate and are protected from damage. These seemed artificial to us. But then how do you defend yourself and attack when you’re traveling a world of sand? You use the environment, like you naturally would. Telekinesis and terraforming will play a big role in defense and attack strategies. You can pile up sand with terraforming to avoid being discovered. Then sneak by enemy camps without a fight. Or shield yourself from incoming arrows with a wall of sand. In the same way you can pick up big rocks and let them float in front of you to block attacks, or take and throw them really fast to hit and kill enemies.

There will be elevated places you cannot get to. Maybe a rock wall prevents you from passing. But you can pile up sand and create a slope and walk up. Or take rocks and arrange floating stairs. There’s really no limitation as to how you can use rocks and telekinesis. If you have an idea, you should try it out and maybe your strategy will work!

What can you tell us about the story?

I like to think of our story as being a good bit more interesting than the usual “bad guy needs punishment”, hehe. Yes, we have that too, and our story begins in a very traditional way with humans being the underdog and you as player having to protect what’s left of your race. It goes a little like this: Hundreds of years ago, a great war raged between the Sarahul Empire and the humans that populated the desert world of Noshrac. The Sarahul were eager to wipe out humanity wherever possible. Only a few human refugees survived, namely the ones that weren’t found by Sarahul armies searching the desert. For years you, the player, lived and grew up in one of these hidden refugee cities. One day, the inevitable happened. A Sarahul scout party finds your hideout and wants to travel back to report it to the Empire.

This is where your travel begins. You have to make sure the human community you helped build stays safe and the message with the location of your hideout never reaches the Sarahul Empire.

During your journey, there will be very cool and interesting story twists that I will not go into here :) This is for the players to uncover! Let’s just say your not constantly running after that scout party, fighting everything along the way. This would just be too easy.

[The developer diary for the story (complete with storyboard) can be found: here.)

The game has come a long way. What’s been the biggest changes, and which has been most difficult?

The biggest change was definitely the visual style. When we began the project we lacked the expertise to make great graphics. We had to take one step at a time. Make something we found looked great, and then let the community tell us that it really doesn’t. It was a very hard learning curve but we tried harder, constantly thinking about how we could make every aspect look better. We literally threw everything over board one day and started from scratch, took step after step and learned a lot along the way. We’re now confident to produce a graphical quality that is appealing to players. I think that was the biggest change and the one we’re most proud of.

What we find most difficult are animations. Despite constantly trying to get better, we find it very hard to craft fluent, good looking 3D animations. It takes a lot of time.

That’s all from Chris. I know that you guys should be as excited for this as I am.

Son of Nor will release in the 3rd quarter of this year on PC, Mac and Linux.