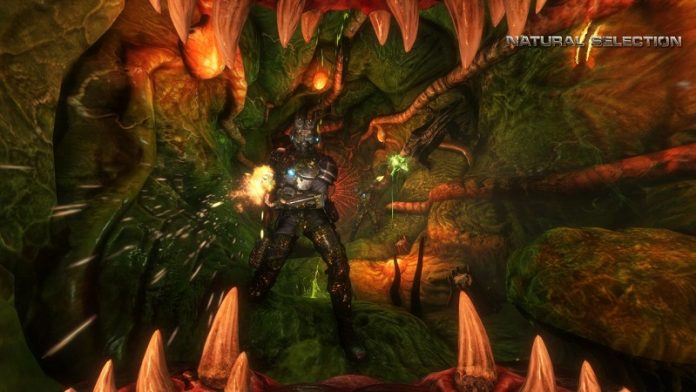 This add on is intended to add a wealth of new content to the game. First off, the aliens will be gaining new abilities, with players will now be able to command a horde of cute little critters that will swarm all over the marines if they’re unable to apply liberal firepower. The aliens will also be getting their hands on a new building titled the “Gorge Tunnel,” which creates tunnels that allows troops to quickly move from one point to the other. The marines will also be getting new weapons in order to combat the alien menace, the most prominent of which is the Rail Gun attachment for the walker.

The update will also contain a brand new map titled Descent which pits marines and aliens against each other on a space station overlooking the planet where the rest of the game takes place. The developers particularly like the idea of a map that conceptually ties the rest of the battle zones together, and so have emphasised the shuttle bays in Descent that would have been used for transport before the aliens attacked.

In addition to the obvious front end changes, Unknown Worlds also intend this update to add polish to Natural Selection 2. Many of the existing weapons and abilities will be tweaked in order to maintain proper game balance and to provide more fun for the players. The patch will also contain a few graphical tweaks to make the game look prettier, and will also optimize the engine so that it runs “faster than ever.” On top of this, a brand new first person spectator mode has been added to the game.

While many games would release this sort of content as paid DLC, Unknown Worlds have stressed that they want to deviate from the norm and so will be releasing Gorgeous for free along with a 50% discount on Natural Selection 2 for the next few days. The update will hit in roughly 7 hours for all current owners of the game.