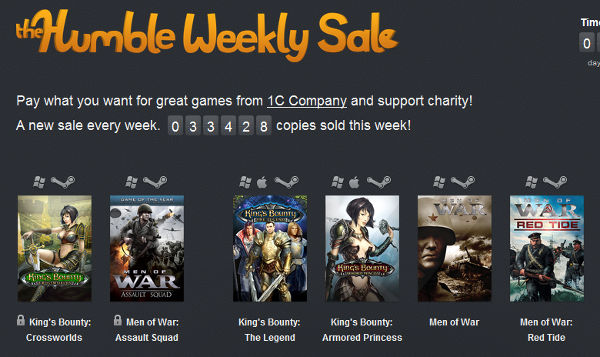 This week’s Humble Bundle is up, the games coming from developer 1C.

Paying whatever you want will net you four games. King’s Bounty: The Legend is a fantasy tactics game mixed with RPG elements. Combat is based around controlling squads of units in turn based combat. It’s joined by the sequel King’s Bounty: Armored Princess.

Also in the pay what you want section is Men of War, an RTS set in World War II. The game is intended to give a sense of the conflict of WWII, and so environments are destructible. Players also face off against up to 15 other players in multiplayer. The sequelMen of War: Red Tide is also included. The single player campaign puts players in the shoes of the Soviet Marines. Unlike a lot of RTS games, unit management is key, with squads able to loot items from the battlefield and be outfitted with supplies.

Paying more than $1 will also net you Steam keys for all games in the bundle.

Finally, beating the average (Currently sitting at $3.36) will net you King’s Bounty: Crossroads and Men of War: Assault Squad, the most recent addition to both series.

The bundle will run for the next 6 days.