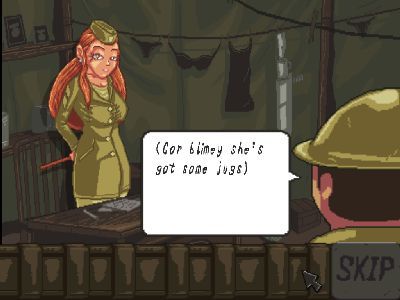 When a game is said to feature crazy humor combined with fast-paced action, I am all for giving it a try and that is exactly how Medal Wars: Keisers Revenge is described by its developer Retro Army.

Keisers Revenge (yes, because you don’t need a ‘) is a comedy action RPG set in the World War 1 where one soldier – YOU – becomes the greatest soldier in the war, at least in his mind. The game brings a retro vibe and some nice gameplay features, like the ability to shoot your enemies in the foot only to be able to go in close and curb their suffering with the knife. Also, the game promises to come with a weird humor, which is always nice and by the looks of it, at least one hot military lady with triple a jugs.

Delivering “hours and hours” of gameplay, as the developers say, Medal Wars: Keisers Revenge does seem like a fun game to try for just $9.99. The best part is that a demo is also available for free, obviously, over at the game’s official website, so head over there and give it a try! And while you complete the download, check out the game’s trailer below: