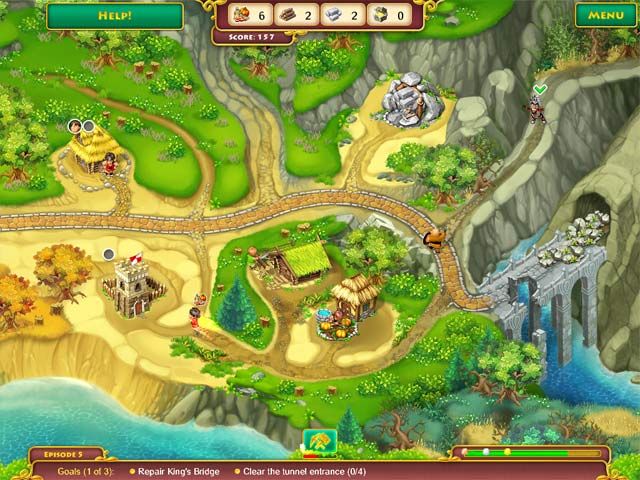 The good guy always gets the girl and saves the day and that’s exactly what you will have to do in the recently released (and already a hit!) game Kingdom Chronicles available on Big Fish Games. This is a very cute strategy title where you rebuild your kingdom, defeat the villain and have a great deal of fun while doing it!

Here’s how the developers of the game describe Kingdom Chronicles: “Journey to a land of royalty and adventure in Kingdom Chronicles! John Brave finds his homeland captured by a greedy villain and only he is courageous enough to fight and save the kingdom from total plunder. Build, trade, research and battle for your kingdom! Workers, clerks and warriors will help you on your quest to restore the towns and villages, solve mysteries, defeat the enemies and restore order. Rescue the princess, defeat the villain, and save your homeland in this fun and exciting strategy game!”

The mechanics are similar to casual strategies (so if you already played Island Tribe or Roads of Rome, then you already know how to play) meaning that you have to rebuild roads, collect resources and destroy bad guys while progressing through the levels of the game.

The good thing about Kingdom Chronicles is that it comes with bright colors, beautifully designed scenes and characters and no bugs (at least during my play time). Therefore, I highly recommend this little strategy game which can be checked out for free, so head over to Big Fish Games and download Kingdom Chronicles now!