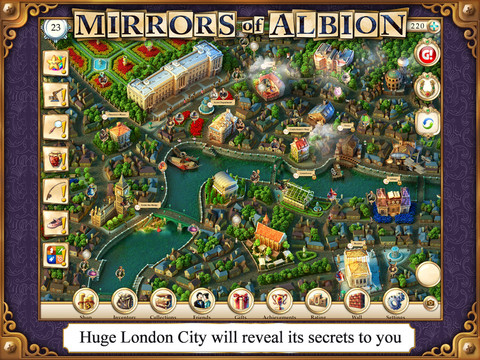 Game Insight have launched Mirrors of Albion on iOS, available for iPad HD and this is a freemium game you’ll have to check out, especially if you are a fan of hidden object games, like we are here at Unigamesity.

Mirrors of Albion is a game inspired by Lewis Carroll’s Alice’s Adventures in Wonderland and puts the players in the shoes of a detective in an alternate version of England, where you must battle with more than 30 varieties of street thugs and shadowy crime bosses in the employ of the sinister Red Queen, seeking occasional aid from Constable Cheshire Jr. and the inscrutable Mad Hatter.

When they aren’t fighting the criminal element, players will explore the gorgeous, hand-painted world of Mirrors of Albion, traipsing the streets of London in search of clues for their next case. Mirrors of Albion will offer tons of unique, story-driven quests that will challenge players to look closely and think fast as they solve hidden-object puzzles in numerous, brain-teasing modes, judiciously using more than two-dozen powerful hint objects and carefully weighing evidence supplied by a memorable cast of colorful characters.

The game is exclusively available for the iPad (at least for now), but pretty soon it will be available on other platforms too, in case you don’t own an iPad. If you do, head over to iTunes and download Mirrors of Albion for free!