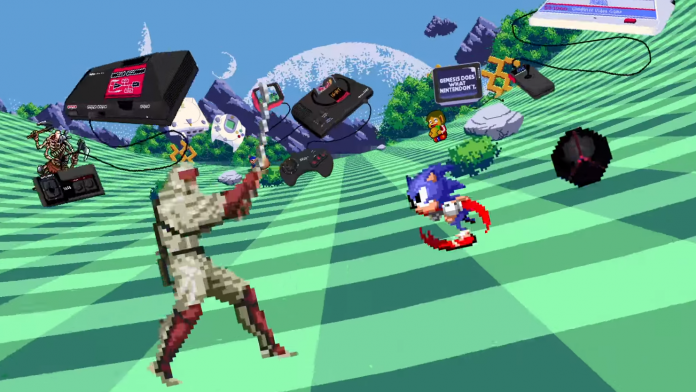 The second I started the Sega Forever trailer and heard the sound effect that plays when Sonic loses his rings, followed by the legendary SEGA voice over, I knew I was in for a treat. The Sega Genesis boxes and cartridges piling up in the box, the dude with the crazy scientist hair and the rockin’ background music all screamed 90’s advertisements. They really hit the nail on the head with trying to invoke old video game TV commercials, and it is absolutely glorious.

I would’ve been fine with just that amazing trailer, but Sega Forever is a real thing, and it sounds really awesome! Sega Forever is Sega’s new line of mobile games. They’re ports and remasters of classic Sega Genesis and – in the future – Sega Saturn games! Launching tomorrow on June 22nd, Sega Forever aims to be a sort of Netflix for classic Sega games. The catalog of games will eventually expand to include all sorts of games.

The first set of games that will be available on launch tomorrow are Sonic the Hedgehog, Phantasy Star II, Altered Beast, Comix Zone, and Kid Chameleon. What a stellar line-up for the first batch! In addition to the games’ regular format, they will also feature modern enhancements like online leaderboards, cloud saves, and bluetooth controller support. For tablet owners, the games will also be playable offline as well!

Sega Forever is not a central app. Each game of the series must be downloaded separately. The games are free to download but will have advertisements with a paid option to get rid of them. In the future Sega will offer some sort of subscription, but that’s what we have for now.

As of now the Sega Forever games are currently only available for iOS and Android systems. In an interview with MCV UK, Sega Networks’ chief marketing officer Mike Evans stated that the engine of Sega Forever is built in Unity, which means that porting to other consoles and devices is a definite possibility. We’re sure that the demand is there, so you can bet we’ll eventually see the Sega Forever games on consoles like the Switch and even on PC with Steam.

Ready to take a trip down Sega’s history lane? We sure are!