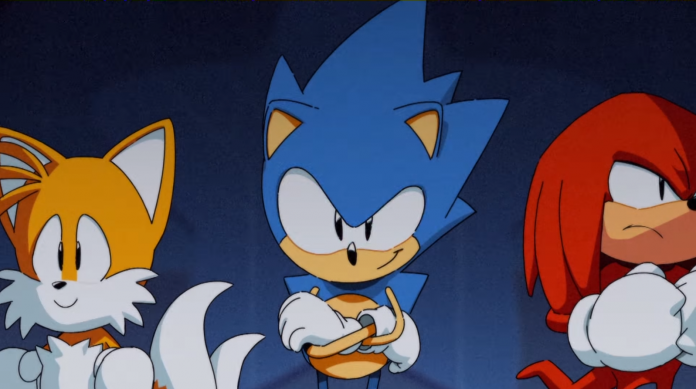 2D Sonic is back in action in Sonic Mania! Accompanied by classic friends Miles “Tails” Prower and Knuckles the Echidna, classic Sonic blasts through worlds both new and old. Sonic fans will recognize returning Genesis era zones, but don’t forget about the all-new ones! Today Sega released a new “Pre-Order Trailer” but it’s way cooler than it sounds. Sonic is sketched to life in a sketchbook form of the classic Green Hill Zone. He speeds through the zone with his animal friends in tow finally meeting up with his two best friends. It’s awesome – take a look!

The smooth and lively animation really brings the whole thing to life, and then we get a glimpse of some more footage from the game. We get to see more dusty dunes of Mirage Saloon, the glass-shattering speeds of Studiopolis, and of course the returning dizzying drums of Flying Battery. The confirmed zones so far are Green Hill, Flying Battery, Mirage Saloon, Stardust Speedway, Studiopolis. We’re sure there’s more to come, and they’ll probably be hiding some surprise zones for gamers to discover on their own!

Tyson Hesse did the animation for this. He’s a popular fan artist in the Sonic fanbase, and is well known for lots of Sonic comics. You can check out more of his work on his Twitter account! But above all this is a good representation of what Sonic Mania is as a whole. It’s being developed by Christian “Taxman” Whitehead, who previously worked on the 2011 mobile and console ports of Sonic CD. There are SO many Sonic fans that are working on this game, it’s amazing that Sega has reached out to them and brought them on board for an official project.

Above all, the most important reveal in this trailer is the official release date: August 15th! Sonic Mania is releasing on Playstation 4, Xbox One, PC, and the Switch. Even better: Sonic Mania‘s retail price will be $19.99 at launch!