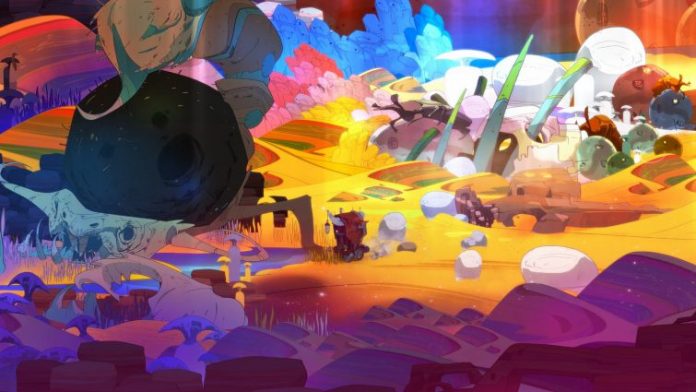 Supergiant Games, the team best known for the wonderfully constructed worlds of Bastion and Transistor, has announced that their latest game Pyre is scheduled to launch on July 25th for both Playstation 4 and PC.

Pyre takes place in a mysterious world known as the “Downside”. In the downside, you play as an exile who has been banished for unknown reasons. You will eventually meet and befriend other exiles who are looking for freedom. Being the only one who can read, your character is dubbed the “Reader” and thus starts your journey.

Eventually you will come across hostile exiles, and thus the ancient competition known as a “Rites” begin. Pyre’s main game play consists of a very unique hybrid of tactical RPG and traditional sports action. To win a Rite, your party of exiles must extinguish the enemy exile’s pyre. An orb drops into the center of the arena and you must work with your team of exiles to launch it at your opponent’s pyre. With each successive hit from the orb, the pyre will weaken and weaken until it’s finally destroyed, winning you the Rite.

Pyre is simple and easy to pick up and play, but there’s a lot of depth for those wishing to master it. Each exile has innate attributes – some can move fast but do low damage to pyres, some are slow but do heavy damage, and so forth. You can control only one exile at a time, but you may freely switch between them at any point. Every exile on the field has an “aura”. While you are in control of the ball, you must avoid touching the enemy exile’s auras, as they will disable you, forcing you to drop the ball on the spot. Teamwork is a must if you wish to conquer the Rites.

Another interesting aspect about Pyre is that it there are technically no fail-states; that is, there is no way to get a traditional game over. If you lose a Rite during your adventure, the story will simply continue. The story of Pyre is meant to be personal to the player and from the sound of it it’s going to be done in a very interesting way.

Of course, it wouldn’t be a Supergiant Game without the fantastic art style. Just take a look at that beautiful featured image! The world of Downside is sporting a hand-painted style that brings the vibrant world to life. Oh, and for the music people, don’t you worry – Darren Korb will be composing the soundtrack for the game and we can’t wait to hear it for ourselves. Be ready for Pyre when it launches in July!