The Humble Bundle today announced that they’d be undertaking a new approach to their charity event; the Humble Weekly Sale. Instead of selling packs of games in fortnightly periods as they have in the past, they’re now offering a single indie game for one week, with new deals launching every Tuesday. This week’s title is the critically acclaimed Bastion, by developer Supergiant Games.

As always, the event is a pay want you want, DRM free deal, but the event organisers have also thrown in additional goodies for those who pay more than the average. A payment of more than a dollar will get you access to the game on Steam as well as in its DRM form. If you spend more than the average (Currently sitting at around $2.60), you’ll receive the game’s digital soundtrack, which includes two bonus tracks not found in the game.

Beating the average in this sale will also get you access to content new to this sale, including sheet music for four of the tracks in the game: Mother I’m Here, Build that Wall, Setting Sail Coming Home and The Pantheon. In addition, fans will get a range of ringtones that are compatible with iOS and Android phones. Also on offer is an exclusive art pack for the game put together especially for this event, featuring over 24 images. 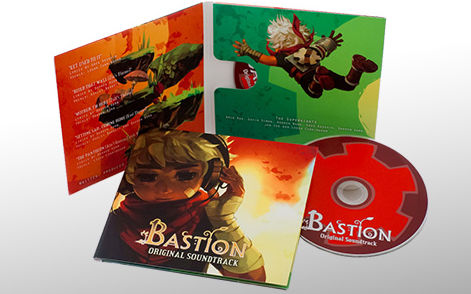 In a move new to the Weekly Sale, the Humble Bundle will also be offering physical merchandise to those who pay more than $25. Fans will be sent a Bastion Bandanna, a CD version of the Bastion soundtrack featuring original artwork and a Bastion postcard. In addition, the $25 dollar bundle will include a postcard themed after Supergiant Games’s newly announced Transistor.