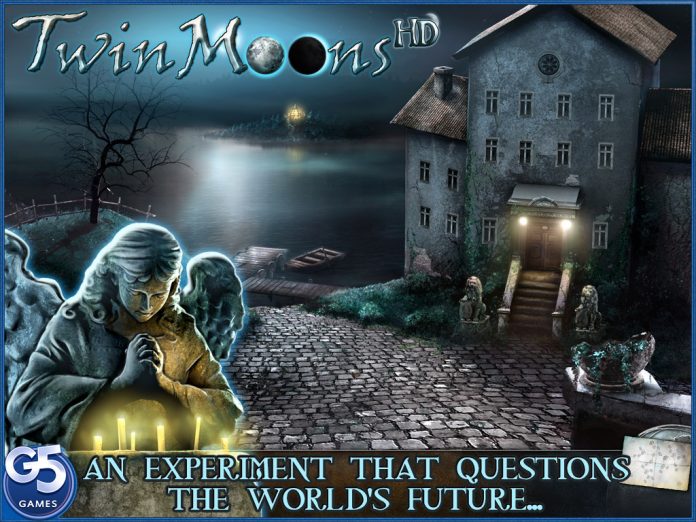 Evolving from the point & click adventure, hidden object adventures have the potential of interweaving an interesting story with game play that rewards observation and puzzle solving skills. Or you just wander from background to background picking up anything that isn’t nailed to the floor until you’re told that the puzzle is solved.

Developed by Cateia Games and published by G5 Games, Twin Moons is a hidden object adventure for iOS devices. You play Jack, a researcher with amnesia who has to wander the titular Twin Moons Institute hoping to piece together his memory. As you witness some flashbacks that reveal your past when you and members of the Institute dabble in unlocking the Half World that lets people play God. Jack must decide whether to finish the project or scrap the whole thing permanently.

Game play wise, it’s a hidden object adventure among hidden object adventure. You pick up things hidden in the background that can be used to open new paths, create new objects, or be used to complete a puzzle that needs solving. It can feel ludicrous how an Institute of researchers employs sliding block or button pushing sequence puzzles for dorm rooms or lockers to store mundane objects (with blocks or buttons missing, naturally), but most of the puzzles offer the right amount of challenge without being too frustrating. And there’s always the skip button when they are too hard or you have to get through the game quickly to write its review.

Twin Moons does have a nice fast travel system with the in-game map where you can instantly travel to the accessible room you need to go to in order to find the objects or puzzle you need to proceed. Given the size of the Institute, this saves a lot of needless backtracking or waiting for the hint button to recharge. Another nice game mechanic is how you are hinted with silhouettes of the objects you need to open up a path during multiple object puzzles.

Twin Moons has an engrossing story told through animated characters who are voiced competently. Each major puzzle unveils the spirit of a fellow Institute member who provides some insight about Jack’s past and objective. I wanted to keep playing to see how deep the rabbit hole went. A notebook that gets filled with observations during the game adds some excellent flavor text to flesh out the story.