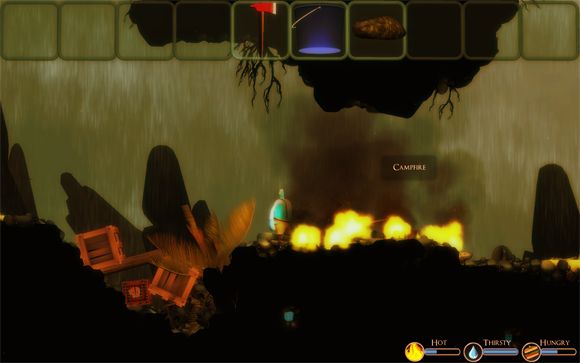 I’m loving it to see that game developers can finally focus on true survival games, myself being a huge fan of anything survival. Therefore, I was pretty excited to hear about Under the Ocean – a game that challenges you to survive on a tropical island from the creator of Under the Garden, also a survival game released for free in 2010.

Under the Ocean has the same mechanics and mostly the same idea as Under the Garden, but comes with much improved visuals, as well as new concepts and new gameplay features. Therefore, you will have to help your character survive on a tropical island after a shipwreck with little tools available: learn how to catch fish and eat it, learn how to make fire and so on – everything survival related in a simulation that won’t be merciful. This means that you will have to overcome the weather, vicious animals, injuries, disease, dehydration and famine to build your home on a deserted island. Sounds like an amazing challenge!

The game is currently in its Alpha stage and you can have access to it (as well as to the final game when it’s released) for as low as $7. Or, if you played Under the Garden and you have faith that Under the Ocean will be a lot better, you can contribute $25 and help the developers of this title A LOT.

And I think you should really do it because Under the Ocean does look like an amazing game. So head over to its official website to find out more.