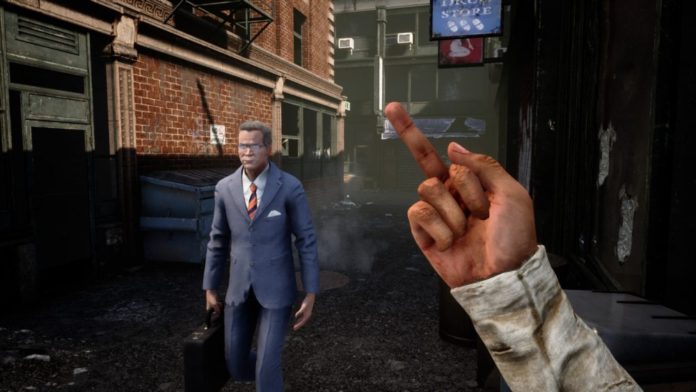 I’m not sure how many people still remember the brilliant game Postal released two decades ago, but I sure do! And my memory wheels started turning when I read about the upcoming Bum Simulator, which seems to be exactly the Postal this generation needs.

Just like the name suggests, Bum Simulator puts you in the shoes of a guy who lost everything and ended up on the streets. It’s your job to decide what his future will be.

Will you adapt to the street life and survive the harsh reality? Will you rain down the fire of revenge over the people responsible for your downfall or you’ll try getting a job a starting over? The possibilities seem to be endless in Bum Simulator, which is an open world game where you do whatever you want.

And that “whatever you want” seems to be the insane part of the game and the reason why I have compared it earlier to the Postal series. Just check out the trailer below to see what I mean:

The game seems to be extremely offensive, which is a brave (but much needed thing) in today’s easily offendable society where everybody tries to be politically correct and say the right words in order to never upset any of millions of social groups in the world.

But what does Bum Simulator do instead? It allows you to drink a bottle of beer, then smash it in the face of a homeless person who’s been grabbing their crotch and making fun of you. Then steal their cigarette, show them the finger and move on.

Well, this definitely sounds like fun and it’s not the only offensive thing you can do in this upcoming game.

Of course, I’m basing my judgement on the trailer alone and the actual gameplay might not be as fun as the game makes it seem to be when it hits Steam “soon,” but I am definitely ready to risk it all and give this game a try.

It’s what we need today. It’s offensive, it’s most likely vulgar and unrefined, but it’s also brave and deliciously fun. This is what video games have to be about and in a world of politically correct titles where even the bad guys know not to swear or offend others, Bum Simulator is a must!

So keep an eye on its Steam Page for an upcoming release. Then play it, for fu*&^’s sake!