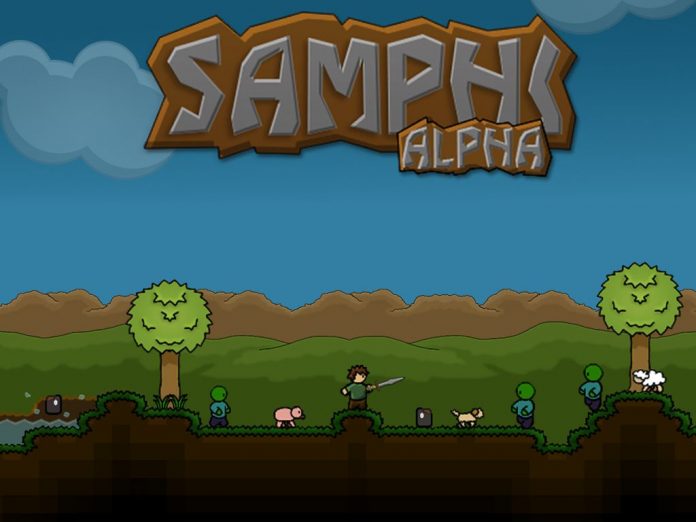 First appearing February, Greeny Games’ RPG, tower defense, survival and crafting environment (and probably some other genres too) Samphi has since released its third alpha build through the indie game distribution website, Indie DB, and to welcoming public appeal.

Though still an alpha build, and therefore being about 17% playable, Samphi conveys enough of its ability to show just how much potential the game has. It has been said before that mixing genres properly will help a game overcome the weaknesses of each, and Samphi has apparently taken this to the extreme; on the surface, one may immediately compare it to Terraria, as it a 2D game with hordes of monsters, digging, building and crafting, but what isn’t these days? Greeny Games manages to take this solid (albeit stagnant) building block, and fill in the holes: characters are given RPG-style stats to improve the overall design of one-on-one combat, the interface is more consistently mouse driven and as a result is more intuitively menu driven.

Though one of the more interesting aspects of the game’s combat system is the aforementioned ‘tower defense’ part: while many games will let you craft weapons and other handy items out of materials you gather in the field, Samphi introduces a mechanic of building units for the player to defend his or her self with. The combat suddenly becomes much more complex as managing resources is crucial to such strategies, especially when the player has to build and maintain a fortress to defend against the onslaught of enemy waves from. In the end, the game uses the numerical design of RPG combat, but cuts out the tediousness thereof with the dynamism of a platformer; and has the exploratory intrigue of a Dig & Craft game (I think I just made that one up, actually), but makes it all feel more worthwhile with the crafting system that breaches further into combat–the normally boring tower-defense style of play is helped along by actually being able to involve yourself in the fray and advance your character stats.

With an art style that manages to be surreal, without being 8-bit, 16-bit &c., even in its alpha build, Samphi comes across as being a very engaging and immersive experience; even those who are like me and can’t wait to get out of this MineCraft-clone rut might want to give the dev’s website a visit and see just what this game is about.