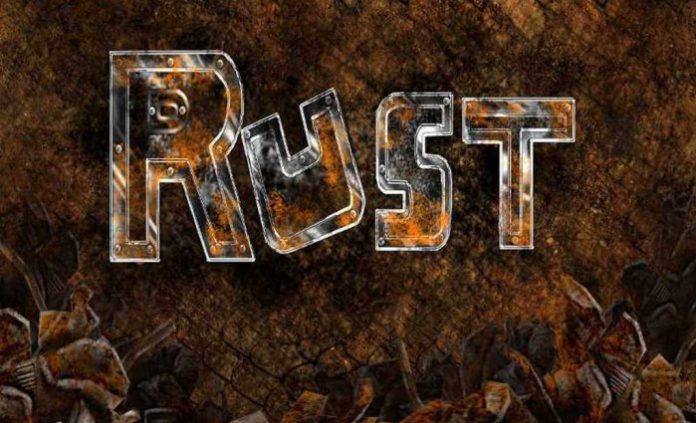 Open world, no rules, pure survival. This is the trend of PC games and I am sure we’re going to see bigger and better. It was all started by DayZ, a game that’s kind of stagnating right now, and it’s all taken to the next level by Rust. But with crafting involved and wild animals and the same unpredictable players… how do you survive in Rust? Read on this guide to find out our tips for beginners!

When you start the game, you already have some items in your inventory: a rock, some bandages and a torch. Not much for the buddy survivor, but enough to get us started and mark the beginning of something great.

So the first thing you want to do as soon as you start the game is to get some kind of tool – this is the hatchet in Rust and it’s relatively easy to craft: smash your rock into a tree to get some wood pieces first, then find a huge boulder on the game map and smash them too to get some rock pieces. Next, open the crafting screen of the game and build your stone hatchet. You now have a tool that will make your life easier and one that proves that you can do it!

With the hatchet built, you should gather some food to make sure that you don’t die of hunger. The easiest animals to get at this point are boars: just sneak behind them and start smashing them with your newly built hatchet. It will take a few hits and running after the boar, but fortunately they don’t strike back and you’ll get a nice chunk of meat! Uncooked meat is bad for your health in Rust, though, so you should first build a fire from your crafting menu and make sure you eat your food cooked. Now survival seems a lot easier.

So, you have a weapon, you have food, you need shelter! Nicely enough, you can build yourself a nice shack in Rust – and you should start doing so immediately. It would be best to find a place as remote as possible, but basically any place is good because no matter where you are, others can still break into your hut.

Building the shack (make sure to build a door too) is not the trickiest part – the tricky part comes from scavenging the skin of a dead animal and building a sleeping bag out of it. If you can kill a wolf – be my guest, but it’s best to try and find a dead animal and rip off its skin. Sleeping bags allow you to “save” the game and return to the same place when you log in again to your game. It would be obviously ideal to put that into your newly build shelter, with the door closed.

Now that we’ve got this covered, we should try to build us a real weapon: the hunting bow. From killing the boar earlier, we got some cloth which should be just enough to build a bow (we need cloth and wood for the hunting bow itself, while the arrows require wood and stone). With the bow in our hands, we can now take on the more dangerous enemies in the game, like the zombies or we could hunt down faster animals and, why not, other players.

When it comes to other players, things are really unpredictable and they are usually hostile, but sometimes they might be friendly. Right now, there are actually few reasons to team up with fellow survivors as it does not necessarily increase your survival chances, but it’s always safer and more fun to be part of a group. Not all the players believe that is true though, so make sure you are on guard when you see other players in Rust.

Now you have the basics on surviving in the game. Of course, there is a lot more than that to Rust with more advanced weapons waiting to be built and a lot more to be learned. But you know where to start, how to do it and your chances have increased significantly.