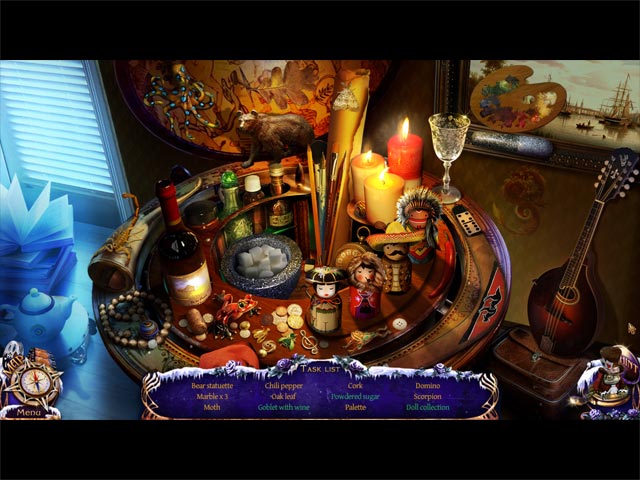 Hidden object games in the Mystery Trackers series were always really good, but this time the series’ developers overdid themselves with Mystery Trackers: The Four Aces, an absolutely beautiful (not only visually) hidden object adventure with great twists and tons of fun injected in the gameplay.

The story is pretty basic in Mystery Trackers: The Four Aces: The entire town of Brightfield was evacuated after a series of bizarre animal attacks. Now, strange creatures roam the streets, danger lurks around every corner and you’ve just landed smack in the middle of it all. As you begin to investigate, you discover that the attacks may have been part of a whole series of crimes committed in town, all tracing back to an organization called the Four Aces. But just who are the Aces and what is their plan? With the help of your trusty canine companion, Elf, you must keep digging to get to the bottom of things.

I know that we keep saying that it’s always the same old detective thing and something new should be brought to the hidden object genre, but let’s not forget that, in the end, this is the theme that goes with the genre and Mystery Trackers: The Four Aces at least tried to make the story as original as possible. I don’t want to spoil things for you, but in this particular case, the story of the game will be something you’ll love to follow.

Of course, it’s not all just the story. The hidden object scenes are incredibly well done, with no scenes repeating and with a medium to high level of challenge, suitable to the experienced hidden object fans.

All in all, Mystery Trackers: The Four Aces is a simply amazing game and I recommend it to you with all my heart: if you like quality HO games, you will love this one too. So head over to Big Fish Games and download the game right away!