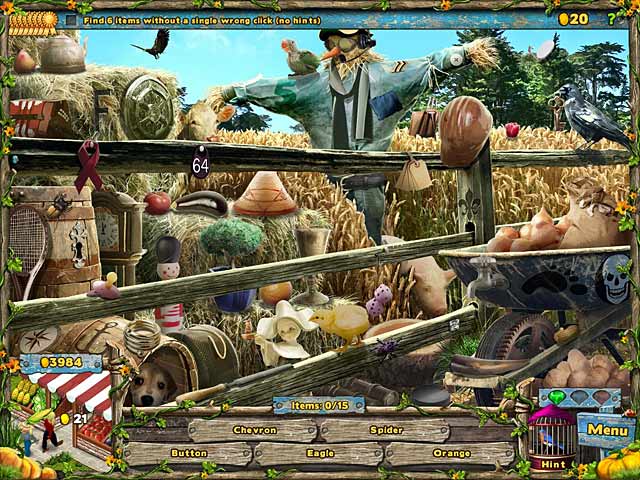 October was a great month for casual gamers, even though there was a slight focus on the Halloween themed games. But it’s not a problem, in the end, because this doesn’t mean that we got bad releases, on the contrary. However, I have picked up the top 10 casual games of October 2012, the best titles released during the past month and I am here to share them with you.

So let’s check out below the Best Casual Games of October 2012, in no particular order:

Welcome to Farmington Tales! Let’s get farming in this unique Hidden Object farming simulator hybrid. Plant crops, nurture animals and run the farmer’s market! Search the farm for rare treasures. Complete quests and hang out with a quirky cast of folk. Build upgrades like a silo or bridge! Plow, plant, water and harvest the perfect crop, even eggs, milk, and wool! Check out the game on Big Fish Games.

Stop a devious conspiracy in Mystery Trackers: Four Aces! The entire town of Brightfield was evacuated after a series of bizarre animal attacks. Now, strange creatures roam the streets, danger lurks around every corner and you’ve just landed smack in the middle of it all. As you begin to investigate, you discover that the attacks may have been part of a whole series of crimes committed in town, all tracing back to an organization called the Four Aces. But just who are the Aces and what is their plan? With the help of your trusty canine companion, Elf, you must keep digging to get to the bottom of things. Good luck out there, Detective. You’re going to need it! Find out why here.

Your honeymoon is cut short when your plane crashes on an uncharted island in The Great Unknown: Houdini’s Castle. You awake to discover a madman has kidnapped your husband. To get him back, you’ll have to use all your wits to pass his sinister tests and solve the mysteries of Houdini’s castle. Along the way, you’ll uncover Houdini’s secret past and learn about the brilliant apprentice who changed his life. Can you expose Houdini’s greatest trick to save your husband and escape the island? Click here to find out!

A local contest turns into an arson scene and now deceit smolders among the charred ruins of the River Heights Town Hall in Nancy Drew: Alibi in Ashes. Police have several suspects, but well-placed incriminating evidence and poisonous local gossip compelled authorities to make only one arrest: Nancy Drew. Can you, as the teenage detective and her closest friends, catch the real arsonist and extinguish the accusations among the embers? Check out the game here.

Botanica: Into the Unknown

You are Dr. Ellie Wright, a botanist stranded on a strange planet called Botanica. Full of curious creatures and exotic landscapes, Botanica is like nothing you’ve ever seen! Test your wits as you navigate through lush forests, steampunk villages, and more. But danger lurks at every corner; make both friends and enemies as you try to outsmart the cunning Queen Kassandra. Can you survive Botanica and find your way back home? One of the best Hidden Games of the year, available over at Big Fish Games.

SushiChop is an easy to learn, but difficult to master slicing game. Your finger is the razor-sharp knife, as you swipe your way to sushi chopping glory! Cut with precision and skill to fill each tray before the timer runs out. Fill a tray chopping the fewest fish necessary to earn a Perfect Chop bonus, but beware the stinky green fish! It’s Fruit Ninja for your computer, which is great. Get it for free here.

Travel back in time to a medieval Chinese city in Judge Dee: The City God Case! Judge Dee, the newly appointed magistrate of Yiwang prefect, travels to an isolated town in his new jurisdiction to find that the mayor’s son has fallen unconscious and became deathly ill. Suspecting foul play, Judge Dee starts investigating. Help him uncover the truth behind the town’s dark secret, its corrupt officials and the true cause of the mysterious illness in this beautiful Hidden Object Adventure game. Click here to find out more about it.

Every night you have the same nightmare. You see children wandering through a maze, crying for help. These sleepless nights are ruining your waking life. To stop them, you must return to Sullivan River Summer Camp to uncover what happened during that long-forgotten summer. Beware though, this camp isn’t all that it seems. With every step, you can feel eyes watching you. Reveal the secret of the ancient labyrinth in this eerie Hidden Object Puzzle Adventure game. Check it out on Big Fish Games.

Thumbelina had the perfect happy ending, until the Raven Queen crashed her wedding, kidnapping her prince. To make matters worse, the Raven Queen locked her up in a dungeon! Will she be able to escape and rescue her prince before he becomes the Raven King? When you’re only a few inches tall, you need all the allies you can get, but beware! Anyone you meet could be a spy working for the Queen! Join Thumbelina as she journeys across the fantastic Kingdom of the Floral Elves in Unfinished Tales: Illicit Love, a charming hidden-object puzzle adventure game! Check it out here.

And these are the 10 best Casual games of October 2012, including a free to play title! Check them out and let us know which of these great titles is your favorite!