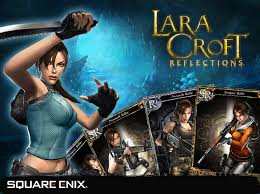 Last month saw another trademark being filed for Lara Croft: Reflections that had people guessing what it could be. Could it be a spin off to the Tomb Raider series? A sequel to 2010’s Guardian of Light? No. It turns out the trademark was for a mobile collectable card game, which is now available in Australia and New Zealand.

Lara Croft: Reflections has been released on the Australian and New Zealand App Store, with a release in the US and Europe surely coming soon. The game is a free download, but also includes the ability to purchase virtual gold pieces in-app.

The game puts you as Lara as you travel through lost worlds whilst collecting artefacts, battling enemies and other players, and combining new weapons to help you level up. You can also evolve weapons to create more powerful variants and ultimately become a more powerful player.

The game allows you to battle the AI either on your own or through a Live Boss Battle Event, which sees you join forces with other players and defeat event bosses to gain better rewards.

The game works with iPhone 4, 4S, 5 and iPad 2 or newer devices. The app also requires iOS 5.0 or later to play and you must have a network connection to play it. The app is also being tested for release on iPhone 5C, iPhone 5S, iPad Air and iPad mini with Retina display.

What are your thoughts on Lara Croft adding to the list of PvP card games? Are you excited for this release? What Lara Croft game would you like to see get a release?