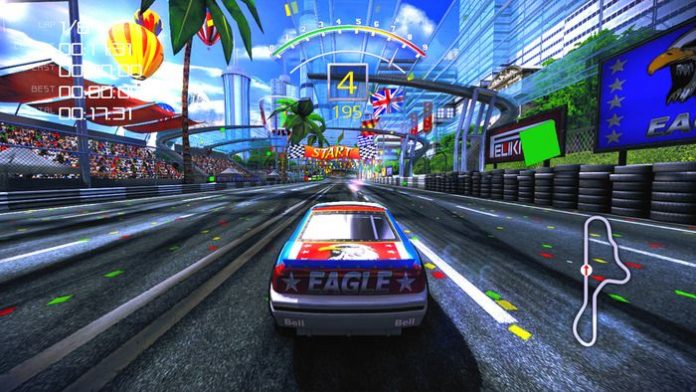 On January 18th, Greek developer Pelikan13 launched a Kickstarter for a SEGA style racer he dubbed The 90’s Arcade Racer.  Currently sitting at just over £12 thousand on Kickstarter, the game has several stunning screenshots that bring backers back to the classic feel of the high speed arcade racers of the 1990’s.  The game appears to already be deep in development.

The developer has also managed to pick up a publisher.  Nicalis, famous for publishing Cave Story and VVVVVV, will be supporting the development and bringing the game to market after it is completed.  The Kickstarter mentions November 2013 as the estimated completion date, but the fundraising drive only continues for five more days.

While the first goal has been reached, stretch goals are in place to ensure that the game is completed in a more timely manner by hiring more artists to focus on making the game as stunning as someone would expect from such a title.  Limited availability awards features the ability to have your logo featured on a car in game for £90, which is a steal for advertising purposes.  Otherwise, if you pledge more than £10, you can expect a digital copy of the game for your Mac, Windows PC, or Linux system sometime this year.  Pledge more than £30, and you will get a physical copy as well!

The art for the games brings back memories of Virtua Racing and Super GT (which is what the developer was going for) as well as some great colorful classic SEGA game feel, without the old school SEGA graphics.  The game looks polished and shines like a modern game should.

If you’d like to see more about the game, and perhaps pledge to back it or follow its progress, the Kickstarter project is active until February 17, 2013.  According to the cover picture on the site, it will be developed for Wii U, Windows PC, Linux, Android, Mac, and iOS.