We already know that dogs are finally coming to FarmVille, but it’s still not clear when will this event happen. However, in order to make the waiting process a bit more interesting, Zynga decided to reveal some clues about the upcoming dogs via their pet rising game, PetVille.

Basically, this is nothing but a smart marketing move from the developers of the most popular Facebook game – many gamers will certainly start playing PetVille just to find out the news about the FarmVille dogs. However, I did not do this since I simply don’t like this type of game. Fortunately, if you’re in the same situation but you still want to find out some details about the FarmVille dogs, I have the solution for you: read on to find out!

Basically, the PetVille dog clues about the next FarmVille addition tell us about the three breeds we’ll be able to purchase (probably) in FarmVille: the Border Collies, Golden Retrievers and English Sheepdogs. So there are three new breeds of dogs coming to FarmVille and below you can check out their images (images via Frisky Mongoose): 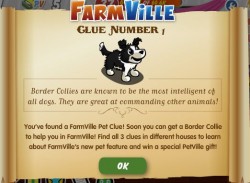 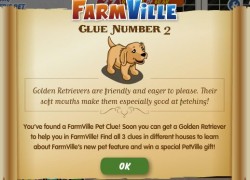 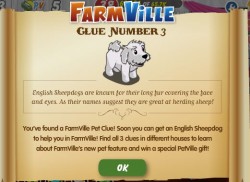 It’s worth noting that, even though teased via PetVille, the FarmVille dogs will be purchasable for those who don’t play PetVille, as an official Zynga statement reads: “You will NOT get or unlock any items in FarmVille by going and playing PetVille. It will not be a requirement to play Petville to get a Dog.”

So… which of these dogs is your favorite?