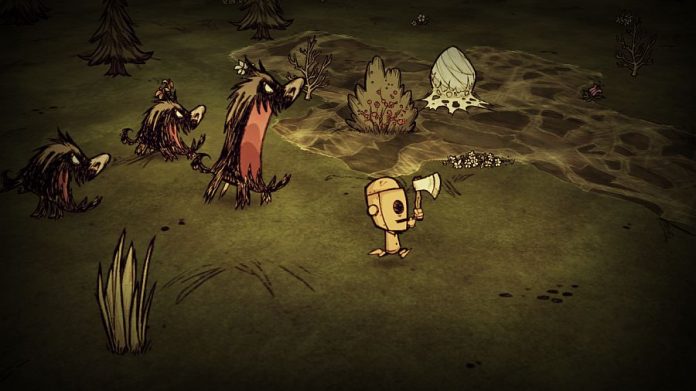 I am a sucker for survival in general and this automatically means that survival games are also my thing – I love playing Project Zomboid and I am always on the search for more similar titles. Therefore, I found Don’t Starve, an indie survival game created by Klei that sends you to an alien planet (or so it seems) where your only goal is to survive for as long as possible. And, of course, don’t starve!

I absolutely loved about this game that it has no tutorial, nothing! You simply start up the game, you hit play and you find yourself in a randomly generated world where you have no idea what you should be doing. So you start gathering flowers and grass and twigs and rocks and soon enough, by looking around and starting to think, you’ll have an axe, you’ll have a fire and you’ll be ready to research things for improving your survival chances. And this is absolutely amazing, because each time I find out something – like being able to create my own twig farm – I am so incredibly happy with my discovery. So yes, in this case, a tutorial would completely ruin the game.

Don’t Starve, although charmingly complex, is not very difficult to play. On the contrary! You control your zany character in the zany world by pointing and clicking on the map, and interacting with all the items in the game is made by clicking the left or right mouse button. Very easy and fortunately you won’t have to spend too long learning to control the game (a hint: Q and E help you rotate the map, this will be useful every now and then!) 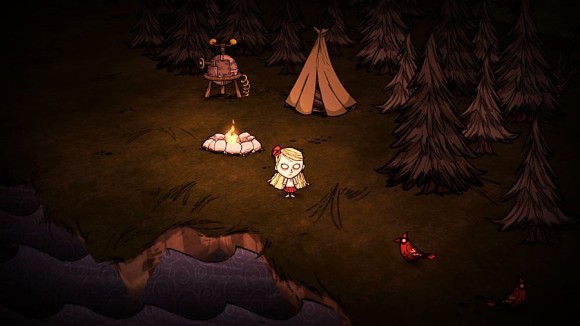 Your goal in Don’t Starve, as I said, is to survive as long as possible in this alien world filled with strange living creatures and a ton of things to do. Crafting and resource gathering or growing will take up most of your time, but there’s also a huge exploring element that keeps your interest alive. As if simply staying alive isn’t enough! Because you have spiders to attack you, you have giant octopus-like creatures living in swamps, wolf-like creatures that appear out of nowhere and don’t seem to be afraid of the fire and lots of threats that threaten your existence. And why should you care so much? Because once you die there’s no respawn, and you will have to start over. Yup, that’s pretty cool!

Of course, not all is lost – you will do some research every time you play the game and fortunately, both the research points and everything you have researched in your previous life will be known to you. But you’ll still have a lot of work to get back to where you were in terms of well being so really, it’s best to stay alive!

Visually, with spooky cartoony visuals, Don’t Starve is true eye candy and you’ll keep finding new things to amaze you even after a few hours into the game. In my case, I was extremely happy when I finally found some poo – here, I said that!

All in all, Don’t Starve is a little gem of a game. At the moment of writing this review, the game was still in beta, but similar to Minecraft – you still get to play something that looks and feels like a complete game with no bugs (that I found), but you will still receive constant updates and content packs for free.

Should you get Don’t Starve? Definitely! This is one of the best and most addicting games that I have played in recent times – and trust me, I played a TON of games – so I can’t do anything than beg you to at least give it a try. Or convince a friend to buy it from Steam and give you a copy (because you get 2 copies for a little over 10 bucks!). So yes, you really have to play Don’t Starve. Now!