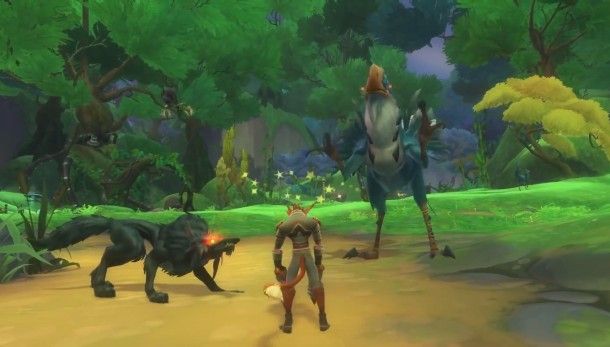 If you aren’t interested by the heaps of original content being pumped out by Carbine Studios, then do not fear. Once again they have provided us with a short and comical video which displays their new Crowd Control concept, and it looks bloody awesome!

For those of you who are unlearned in the intricacies of MMORPG Acronym’s and dialects, Crowd Control refers to any ability which will cause you to lose control of your character. Whether it be through a stun, disorientate, fear, blind or any other effect on the seemingly endless list of Crowd Control abilities available in modern day MMORPGs’.

The real problem that many players have with crowd control abilities is the fact that they cause you to lose control of your character, and it is out of your power to remove them. This leaves you standing around for X amount of time until the effect wears off. It’s a rather boring experience, as most forms of crowd control simply freeze your character in place, and you are just left waiting around. However, Carbine Studios; ever the ingenious type, have scrapped this staple aspect of many modern MMOs’ and replaced it with their own unique touch. Lovely.

Instead of standing around, like you’re waiting for a bus, crowd control in Wildstar is actually an interactive experience. For instance, if you are disarmed, your weapon will fly across the map and you will have to run after it, like a dog chasing a bone. If you are disorientated, your movement keys will change — so instead of strafing left, your character will strafe right — possibly into a large pit of hungry snakes, or into the direct route of a stampeding boss.

This is all brilliant, but what really excites my nerdy desires is the fact that these types of crowd control can overlap. Nothing sounds more fun than chasing after your dismantled weapon whilst dazed, and feeling like you are walking back from the pub after a long drinking session. The situations that could arise from scenarios such as this this will undoubtedly be truly hilarious, and to all of the soon-to-be raid leaders out there, I feel sincerely sorry for you.

However, not only did Carbine reveal that they would be revamping all forms of crowd control, they also touched upon uncharted territory. Crowd control effecting bosses. Even mentioning this thought in most MMORPG’s will cause a raucous, and is the equivalent to mentioning Voldemort’s name whilst attending Hogwarts.;You shouldn’t do it. But as you can probably guess, Carbine Studios aren’t scared of a little controversy, heck, they even announced a subscription fee for Wildstar amidst the controversy surround the downfall of the subscription based MMO behemoth, World Of Warcraft(I digress). Boss crowd control will revolve around a system called ‘Interrupt Armor’. Players will need to work together in order to break this armor, which recharges regularly. Once it is depleted, players will be able to crowd control the boss, although the extent to which they can do so is not clear yet. From the video it looks as if you will be able to stun bosses. However, that is all we know so far.

Wildstar will be released around Spring 2014, and there is currently a closed beta running if you’re feeling lucky. The real question is, do MMORPGs’ need a spring clean(pun totally intended), or is the current MMORPG system a stable one? Please leave your comments and ideas below!