It’s becoming increasingly difficult for MMORPGs, let alone new properties to break out after one game has dominated critically and commercially for 10 straight years. After the high profile failures of Star Wars: The Old Republic and Elder Scrolls Online it’s understandable to approach any new game with caution, especially with one behind unreasonable marketing hype. WildStar is a game that has been developed by Carbine, made up from individuals involved in World of Warcraft, even encompassing talent from Valve and the fondly remembered City of Heroes. WildStar’s existence has been known for a few years now, and after the aforementioned profound failures approaching it with caution would only be the smart thing to do.

WildStar opens by throwing caution to the wind and breaks generic MMORPG tropes through introducing faster and looser gameplay mechanics. Jumping into WildStar for the first time, even as a seasoned veteran of the genre will feel like a new experience due to the lack of single target damage and exchanging it for a fixed cone of attack that changes depending on what ability the player chooses to use. Effectively every single attack in this game is an AoE, with no such thing as an auto-attack. In concept it’s a maddening idea that would only lead to mayhem, but in practice it finds a way to work superbly. Due to the timing and separate functions of each ability at one’s disposal, it ensures that most abilities don’t work the same way. This leaves the feeling of each action the player takes being fresh and the feeling never really goes away as you’re left tinkering with the placement of a shot and how to lead towards efficient combos. There’s an emphasis placed on aiming skill rather than repetition, and it helps keeping things from feeling mechanical by nature. There’s still a need for rotations, but to perform well in WildStar it takes more than knowing the correct buttons to press and on what, and it all flows surprisingly well.

Alongside the revamped PvE mechanics are certain professions a player can take which are offered at the creation of their character, ranging from Soldiers, Scientists, Explorers, and Settlers. The Soldiers themselves are the typical hold areas, test items and free friendly NPCs and offers itself as the most generic and familiar option. Scientists explore the lore and environments in the world, allowing one that was especially interested in the story of WildStar a profession to satisfy their curiosities. Explorers climb vistas and reach hard-to-find areas on a map and Settlers help themselves and other players with buffs, vendors, and flying waypoints to other areas depending on where the nodes lie. These separate quests offer the ability to break up the monotony of questing with side tasks that reward cosmetic armor, titles, and more importantly specific abilities that make fighting enemies easier in the world. 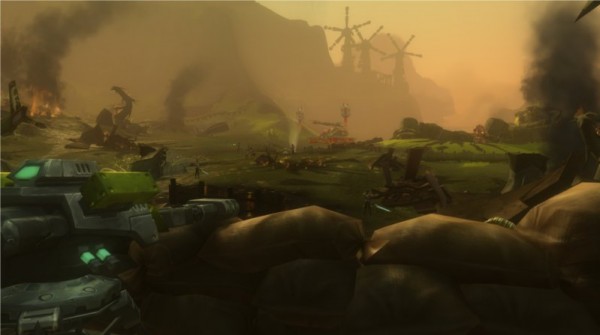 Enemy NPCs gain unique abilities that expand upon the generic auto-attack the player character until it or the player dies. Of course the auto-attack still exists, but NPCs throw in special abilities with the potential of doing tremendous damage even if it’s a lowly animal or grunt. If a player attempts the tried and true tanking and spanking, which involves standing in a stationary place and holding a monster’s attention, they will quickly be overwhelmed by special attacks that could kill them. The game allows for many of these attacks to be dodged through rolling to the side or simply running away, which in turn creates accountability in terms of a death. In a dungeon scenario, most deaths aren’t caused by another player, but instead one’s own mistakes. It becomes difficult to lump one’s own inadequacies as a player onto the healer or tank when the mechanics of the fights are so freeform. The dependency on movement can lead to chaos, which WildStar revels in.

This chaos can lead to confusion to those not practiced in the mechanics of WildStar, which involves throwing out any preconceived MMO ideas out of a tall building and tackling any and all objectives with an open mind. Changing the core concepts of a game from the very beginning after so many people spent over a decade with set patterns and mechanics can be jarring at the least and frustrating at its worst. WildStar also demands the player always pays attention regardless of the situation, which will disappoint many looking for a mindless romp through a pretty landscape, but offer a welcoming challenge to those willing to learn.

The landscapes and characters are indeed pretty, with each zone being wildly different from each other in terms of color and environment. The only thing that remains a constant throughout the planet is the very cartoonish artstyle that accompanies it. This game takes cartoonish to a wildly different level which will serve to turn off those looking for a serious backdrop, though the artstyle in WildStar is the best thing going for it aside from the actual gameplay mechanics. Each race, gender, and class look different from one another, with Carbine even managing to make their Elves and Orcs look new and exciting. Humans, typically the staple for a boring race in fantasy titles, manage to become fun to interact with and play as, with the Dominion Humans being snooty almost-Star-Wars-Imperial and their Exile counterparts being hillbillies in space with high tech weapons. The Exiles and Dominion as factions clash so well with the Dominion showing a sophisticated, high class city while the Exiles inhabit a ruin and ghetto. The cities alone tell the tale of who represents what, and it’s very rare that artstyle alone can tell the overarching narrative can be told from structures and cities alone, it’s when you know that it’s special. 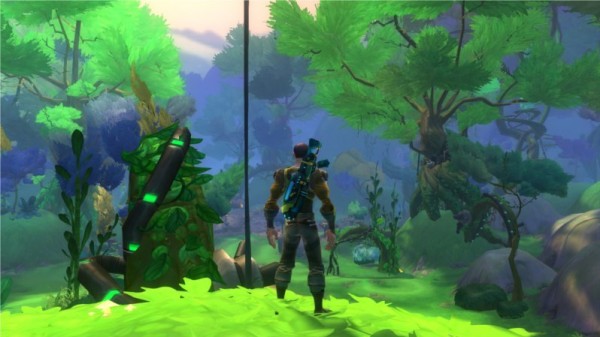 The story tells the tale of both factions feeling wronged by the other, which leads to conflict between the two sides. What WildStar does to add a twist to the formula is stick its tongue so far into its cheek that it becomes lodged and impossible to remove, not that Carbine wants to remove it in the first place. The game almost never takes itself too seriously, even the evil undertones in the Dominion’s starting areas are highlighted with comically overdone stereotypes of Exile races and manages to lighten the mood on the reeducation being done in their ship with ridiculous scientific experiments being run by a tiny furry creature in a labcoat. The story even features a narrator, who delivers information about key areas in zones with a voice that wouldn’t sound out of place overdubbed on monster truck event commercials. This narrator also comments on leveling up, along the lines about how the “universe just got more awesome.” that helps nail down the lighthearted nature of the game’s environments and story.

One of the more anticipated features in WildStar is the player housing, which involves decorating a plot of land designated as your own with no outside player input on items. Typically this includes predetermined set pieces for homes and land, which Carbine does provide, though it doesn’t give the same set ground for accessories. The accessories one can gain through the game world either by crafting or fighting are fully customizable to an absurd degree. If the player wants a tiny table with cubs the size of a Human being it’s doable through the customizable scaling and rotation of items. If one’s prerogative is to make a by-the-books home with a carefully decorated indoor area then that is allowed, though if another wanted to go all out crazy and make a park for hoverboards it’s doable through patience. The housing wasn’t simply a tacked on feature to satiate a player’s urge to have something of their own in private, there are crafting stations, supply nodes, and bonuses one can gain in their own plot of land. There are rewards to having a home through bonus rested experience, or even boosted experience and money through PvP, crafting, or PvE. Everything about the player housing was done correctly, and Carbine provides the most depth for it out of any MMO on the market today, it’s surprisingly easy to sink in hours decorating land.

Aside from the PvE content WildStar offers up more straightforward PvP gamemodes with typical battlegrounds of the 10v10 variety and arenas which are both rated and unrated. The actual battlegrounds are unique as they are slight tweaks to the typical capture the flag and control point gametypes. For instance, WildStar’s version of capture the flag is replaced with a one-flag capture idea with randomized positioning near the middle of the map which the teams must grab and mount on their walls, with the maximum of five. On top of capturing the randomly spawning flag the teams are allowed the ability to steal enemy flags, which helps solve MMO’s problems with the lack of defense in battlegrounds. As long as one stays with the flag things will go smoothly was the previously established strategy, with defense being thrown to the wayside because why bother if all that awaits the defender is a 10v1 demolishing. Fights occurred in the middle of the map, where the winning team would go on to capture the flag. Having not only a middle flag spawning at random intervals means that balance must be obtained between attacking and defending, with some attackers even going after the enemy’s flags in their base to steal. These battlegrounds punish not only one-track thinking but encourages thinking uniquely depending on the situation of the battle and what resources to allocate where. The especially interesting PvP feature in WildStar is Warplots, a build-your-own-base endgame content that features 40v40 battles between other guilds and their own bases. The actual gamemode works a lot like the player housing with items being acquired in the world that can be added to one’s Warplot, but with consequences. If one were to lose a Warplot battle their own land would be destroyed, forcing them to rebuild. It adds tension to the fights on top of adding a unique twist to the PvP conventions which generally remains static.

Everything about WildStar was made with care, and an urge to break typical MMORPG conventions. In the sea of serious and gritty stories and environments, WildStar comes out with a funny, colorful story and world featuring cartoonish characters and ridiculous circumstances. Where most MMOs offers typical mechanical rotations for spells and attacks WildStar makes everything an AoE and makes fights chaotic and flowing. It reads off as a game that set out to betray and be the opposite of every MMORPG that has come out in the past decade and succeeds. Carbine created a game that is full of surprises from the opening cinematic, and broke any and all expectations set upon it in a gleeful manner. After countless disappointing MMORPG launches and games, it’s almost commonplace to approach a new game with caution, with expectations lowering with each failed promise. In the end, it’s comforting that a game can be made that raises the bar on a genre and does it in its own way. WildStar stands as a game with no real comparison next to it, and this writer would sooner lump it next to games like Ratchet & Clank rather than any contemporary MMO if only for it’s charming graphics and fun story. Not only did Carbine manage to make a fantastic title, it managed to make a stale genre fresh again, and hopefully it sets the stage for games, especially MMORPGs for the future to get a little insane with ideas and go for broke. Even if it fails, it’s more interesting than seeing yet another World of Warcraft clone.

3 Types of Security Breaches for Businesses to Watch Out For