I love maths. It’s not very often I get to say so and even when I do, it generally results in some awkward looks my way, followed abruptly by an even more awkward silence. I also ‘love’ infographics; there’s nothing more satisfying than taking in a wad of information without much reading, thanks to brightly coloured and easily understandable charts and graphs. So imagine how happy my not-so-inner geek was when Metrico was announced in 2013. A puzzle-platformer that would involve interaction with a series of infographics? I was in long before Metrico was announced as a PlayStation Plus title. So does the theory translate into a great gaming experience? 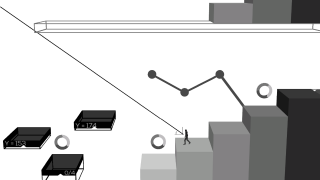 In practice, Metrico’s use of infographics serves as both an overall theme and art direction for the title as well as providing genuinely useful gameplay mechanics. Metrico’s design, on the whole, is extremely minimal both in terms of the visuals and game design. Metrico offers absolutely no explanation as to what is happening; it stays far away from trying to provide a compelling narrative and it delivers a better experience for doing so. Metrico is very much a game similar to old school standards – here’s what you’ve got to work with, now play and enjoy.

Aside from the numerical signposts and infographic figures, Metrico doesn’t even feature words. You play as an anonymous character, stuck in the world of bar charts and graphs, discovering your own direction and proceeding through a series of increasingly mind bending puzzles. Metrico can be extremely alienating at times, rewarding experimentation without offering even the slightest hint. 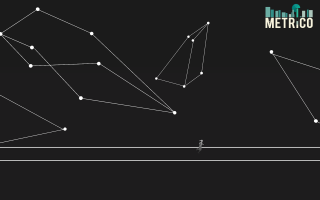 Puzzles often involve players testing the waters to see what actions impact the environment. A bar chart may increase upwards when a player jumps, for example. That same bar chart may be your platform to reach higher levels of an area – by jumping too often, the bar will rise beyond your reach. Planning is absolutely critical once you restart following some experiments.

A lot of the puzzles in Metrico work in a similar manner; work out what action effects each part of the environment before figuring out in which order you need to perform those actions to proceed. Metrico requires patience as well as creative thinking. I found myself stumped a number of times during Metrico’s roughly six to eight hour challenge-fest. Sometimes I stumbled across the answers, even if by mistake. Other puzzles required me to return later in the day with a fresh perspective. 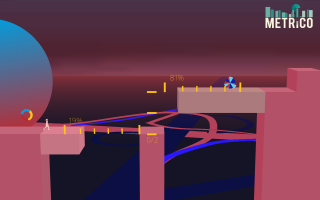 The makings of a great puzzle game are that you are sufficiently challenged. Metrico provides ample challenge throughout; it will work that grey matter in your head to levels which simply aren’t regularly visited during other games. It’s a refreshing experience. Increasingly, games hold players’ hands with sign posting, shiny “look at me – I’m important” objects and even direct hints. It’s entertaining and refreshing to be challenged knowing that the game isn’t going to pop up in a few seconds with a speech bubble saying something along the lines of “Have you tried this …”.

There are some interesting concepts that feel under explored in Metrico. There’s a section between each ‘world’ that lets you pick between one of two doors. They ultimately lead you along the same path, but Metrico connects to PSN to gather the latest figures, displaying players’ choices in a pie chart during these sections. It would have been an interesting idea to explore further within Metrico – maybe by providing statistics on the average amount of time a particular level took players or what percentage of players had completed a particular section. It would have enabled the developers to further build upon an interesting and unique theme within the game. 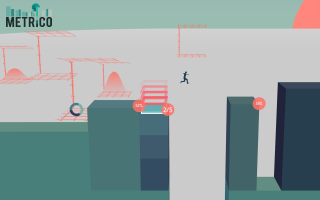 Metrico makes use of the Vita’s multiple inputs in some amusing ways. Some puzzles require you to tilt or move the device in a certain direction and there’s also some amusing use of the rear camera. However, although Metrico makes use of Vita features many developers simply ignore, it’s not all good news. Sure, sat at home it’s great fun to twist and turn the Vita, but it’s highly impractical. You certainly wouldn’t want to do the same actions on the bus, or during lunch at work, for example.

When Metrico does ask you to use the rear camera on the Vita, again it’s a challenge in more than the game environment. Metrico has stages which require you to find objects or lighting of a certain colour nearby. It’s a neat idea, but an entirely un-necessary and ultimately restrictive idea. If you’re sat at home relaxing on the sofa, it’s unlikely you’ll want to get up and walk around the room or house looking for something red in colour. 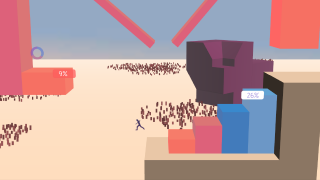 As a Vita exclusive title, you have to hand it to Metrico and developers Digital Dreams for what they’ve accomplished and their intentions with the game. For the most part Metrico is an intriguing and interesting puzzler that focuses solely on being a game instead of providing superfluous and irrelevant modes and content.

Metrico is let down a little by the fact that it may have pushed the bar a little too far with some of the input requirements, but nevertheless is a title that all Vita owners should find space to accommodate on their memory card. As a PlayStation Plus Instant Game Collection title, Metrico is a must download if you have even a passing interest in platform puzzlers. Whether or not you’ll see the game out in its entirety will depend heavily on your own patience and ability to think outside of the box. Conversely, thinking outside of the box is exactly what the developers have done with Metrico and deserve praise for confidently developing a brave, and sometimes alienating, experience that provides a satisfying reward in return for your patience and time.