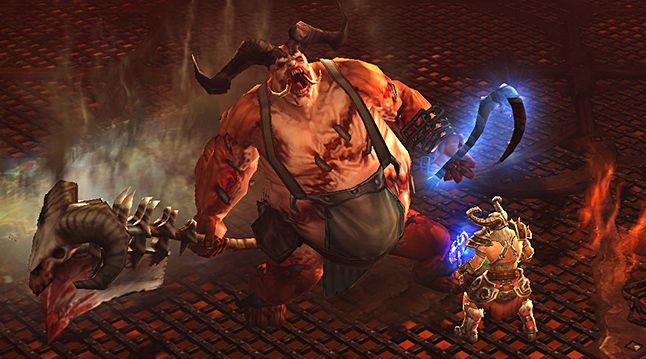 I didn’t want to use the words Diablo 3 and failed in the same line because lets face it the game has overall been a massive success and raised the profile of PC gaming right back into the limelight where it belongs. I love the game, from jumping into a crowd of enemies with my Barbarian and see them fly all over the screen to fighting elite packs for minutes on end never gets old, but once you hit the ultimate challenge of Inferno difficulty many things start to slap you in the face and you need to ask your self “how many more hours am I willing to commit to this game to beat it?”.

So recently there have been some murmurings have come from within Blizzard that they recognize that the end game item hunt isn’t enough to keep people playing for the longer term and I as well as many other people would agree with that. We all know that this game is not an MMO and isn’t designed to be played for hundreds maybe even thousands of hours like a World of Warcraft, but most hardened Diablo players where expecting a game of massive depth that they could play for many months if not even years to come and in that area the game has been found somewhat wanting.

Diablo 3 is a gear driven game that’s for sure and once you hit the level cap you need to start thinking about how to improve your character with gear which means you need gold and here is where the problems start, especially after the 1.0.3 patch. I got to Inferno just as the patch went live and had a shock the first time I got my gear repaired and it cost me 35k in gold, 35k gold which I would like to spend on the auction house improving my gear to progress farther into the game.

As I understand it Blizzard did this to try and combat the inflated prices on the auction house by giving everyone less gold to spend on items and thus in theory auction house prices should come down as the items don’t sell for the crazy prices people are asking for high level items. Has it worked ?, well not from what I have seen. Most high level items are still in the ten’s of millions and when you are spending 25% or more of your gold on repairs for your armour you do begin to wonder “how can I make enough gold to buy that uber auction house item I want?”, the answer… by playing for many many hours.

I don’t want to put a massive downer on the auction house as I think it was a great idea and there is no way I could of got as far into Inferno without it, but I do think a cap on the prices for items and better item drops while playing would really encourage people to keep playing and battling through to the end of Inferno difficultly. Many of the friends that I’ve played with have already given up after the 1.0.3 patch and gone off to play Path of Exile beta or are waiting for Torchlight 2 as a kind of protest I guess.

Hopefully patch 1.0.4 can help, with legendary item stats being improved and maybe even PvP mode will belatedly arrive. For me simple things like adding super rare recipes for items at the blacksmith for each character class or items that open up secret areas like the staff of herding for example will keep people interested. The blacksmith for me just becomes a waste of gold once you get to higher difficulties as the many of the items you make can have totally irrelevant affixes for the class you are playing so you may as well save your gold for the auction house. I still think the drop rates are also far to low for high level items, in the 160 hours that I’ve played so far I have only found one legendary item and the stats where so poor that I could only sell it on the auction house for just over two thousand gold.

I really hope Blizzard will make some improvements, tweaks and listen to the long term players about how to improve the game and keep it interesting for longer. No doubt at some point they will announce an expansion for the game which will be great and they can keep adding bits and pieces to the original to extend the later acts a little. I myself am still playing the game on a regular basis despite some of the frustrations I’ve already mentioned, the chaos and carnage of a four player Inferno game still hasn’t worn thin and probably won’t for quite a while. In Blizzard we trust.