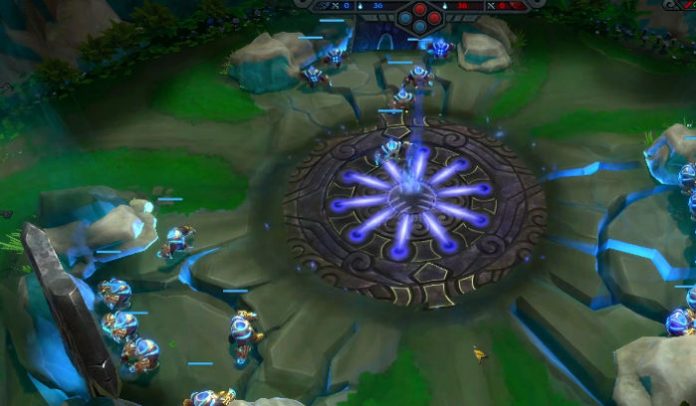 Late last week, EA announced that they will be publishing their own contribution to the “MOBA” genre, with Waystone heading development. Today in an interview with Machinima, the developers voiced some of the thoughts and design concepts that will be going into the game.

According to the developers, accessibility and enjoyment are the players are key in their design, so it sounds like they’ll be steering away from the more ball breaking difficulty of Dota.

As seen in the interview, Dawngate will feature a heavily stylised art style that is reminiscent of LoL, but with more of an arcane circuitry feel. Dawngate will also use a respawning inhibitor system similar to LoL, although in Dawngate’s case these inhibitors have been combined with the towers to form Bindings. Destroying these structures will temporarily power up a unit in the game called a Strider, which normally wanders around covered with chains and sealed with a giant key. When an enemy Binding is destroyed, Striders shed their chains, gaining new abilities.

As players advance and destroy enemy Bindings, lines of arcane energy will blink out of existence and then slowly crawl back, giving a visual representation of the time left until a structure respawns. Apparently the visible nature of these respawns is something that Waystone want to emphasise, as it gives players an incentive to hold out long enough for enemy Striders to power down.

Unlike most MOBAs, Dawngate will also be using RTS elements. Players may capture and hold Spirit Wells, which produce workers. These workers will automatically mine resources for the owners, increasing the amount they can spend on items. The enemy team may act against these Spirit Wells however, killing workers or capturing the node for themselves.

The game is currently in closed beta, so if you’re interested head over to the official site.