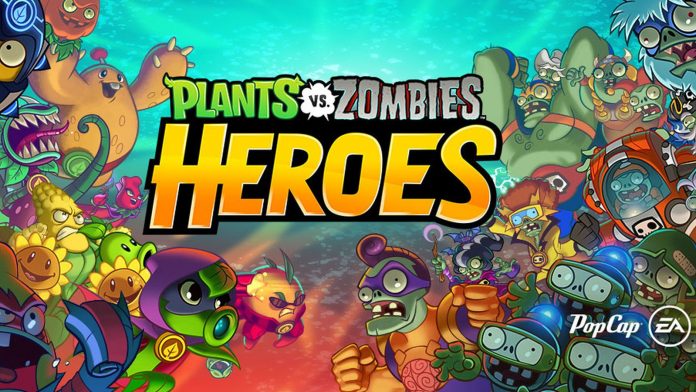 I love playing CCGs and I did play my fair share of big budget and no-name ones and managed to find at least something to enjoy in each game. You can imagine how surprised and happy at the same time I was when I found out that a Plants vs. Zombies card collecting game is being launched by Electronic Arts and PopCap. Plants vs Zombies: Heroes is the name of the game and we’re here to find out how good or bad it is.

I’ve actually been playing the game for a while now, since it was in soft-launch and I’ve seen it getting better and better. I’ve seen it pushing the limits of an LG G4 to the maximum and getting sluggish at points and I’ve seen it fly and deliver a flawless gaming experience on an iPad Air 2. And I have to be honest with you and admit that no matter what device I was playing it on, I had am amazing time!

For Plants vs. Zombies fans, the game will definitely be something completely new. It has nothing to do with the tower defense game we all love (except for similar plants, of course), but it is amazing. It also comes with some new ideas of its own to inject into a genre where I thought that everything’s been tried and done already.

Basically, in Plants vs Zombies: Heroes you collect cards and build decks that you test out against human players all over the world or against the AI in single player missions. The nice part about this game is that there are two factions you can play as: the Plants or the Zombies, each with its Pros and Cons and each with different Heroes you can unlock and play as, each hero having access to different and unique cards.

In other words, in terms of diversity, Plants vs Zombies: Heroes has a lot to offer and the cards are really balanced as well, so unlocking the final Zombie Hero doesn’t mean that you get the best hero in town and you’re ready to win everything. Which is always nice. Offering strategic players a chance is always good. But, of course, you can use some tips and tricks if you’re just starting to play the game because there are some unique mechanics in this game, and you can start with those here.

And it’s exactly these unique mechanics that make the game so charming. Except from the fact that there are two factions in the game, each with unique and completely different cards (the Plants and the Zombies), we also have a few gameplay elements that are innovative. For example, each game takes place on a yard divided into five lanes and you can normally play a single card per lane (although there are special cards that can team up as well). Even more, one of the lanes is a water lane so just a limited number of cards can be played there, while one or two lanes are elevated, offering bonuses to cards that prefer heights. And just from these details you have a bunch of new strategic options and even more reasons to love the game!

And the new things won’t stop here! The zombies also bring an interesting gameplay element to the table: the Tricks. Each turn, the zombies can play Tricks (if they have them and if they have enough Brains, which is the Mana for Zombie decks). These special cards are played AFTER all cards have been played and before the attack phase takes place. This again can change the game completely, brings up a ton of new strategic options and always keeps you entertained and your heart pounding as well because you never know when a trick destroys your best card out of the blue.

Gameplay aside, Plants vs Zombies: Heroes seems like a very simple game and everything is pretty straightforward. You have single player missions, you have enough rewards to keep you going, the challenge level is pretty high for what you’d expect from the game’s seemingly casual approach and you have versus matches which are the salt and pepper of the dish. I don’t really like the fact that the currency used to buy card packs is pretty difficult to hoard, but most games do that trying to force you spend a little dough on card packs. Plants vs Zombies: Heroes makes no exception, but you can still play a decent game if you don’t want to spend money. Just expect progress to be a bit slower.

All in all, Plants vs Zombies: Heroes is surprisingly good. PopCap went out of their comfort zone with this new title and risked a bit but, in my opinion, it was all worth it. It’s such a good game that it has already spawned a few fansites covering strategies and decks and everything about it – and fansites are always an indicator of a game’s high quality. There’s the gameplay, the graphics, the whole mix as well and in the case of Plants vs Zombies: Heroes, everything’s perfect. You’ll love this game!