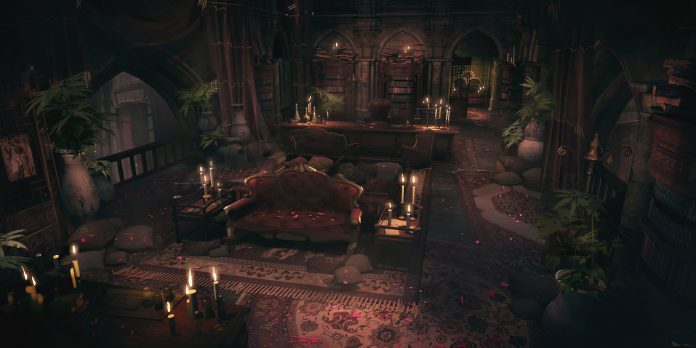 Square Enix and Eidos Montreal have been unveiling innumerous artworks about the upcoming remake of Thief. Last week, I’ve analyzed a mysterious drugstore artwork, now I’ll present and revise the famous House of Blossoms, since a new art piece featuring this promiscuous place has just been released.

In the new Thief, action and stealth will be two distinct, yet possible ways to approach the storyline. This hybrid feature will be clearly noticeable when visiting crowded places like the congenial brothel, House of Blossoms, where players can decide how Garrett will achieve his goals. Assuming the role of a pure rogue is not the only way to progress in this title; engaging violent encounters will also provide viable ways to advance, however with greater costs, as Eidos Montreal’s producer Stephane Roy stated:

House of Blossoms: Revising The City’s Well of Corruption

This charming place is known to be one of the roots of all evil in The City. The House of Blossoms is the prominent brothel designed for the rich, run by Madame XiaoXiao. In here, law has absolutely no place to be and corruption seems to taint every soul within the nest of blossoms. As a remarkable symbol of chaos and deception, the House of Blossoms is one of Garrett’s favorite places to hunt for justice. The official release of this artwork proves that Blossoms’ will have a great impact in the storyline. This well of corruption isn’t a simple brothel or an insignificant place; it’s a notorious indicator that exposes The City’s obnoxious state of oppression, subjugation and persecution. This picture reveals an empty luxurious room filled with blossom petals. This is no ordinary room however; the huge amount of books, the desk and the great illumination indicate that this area holds great importance. It’s probably Madame’s XiaoXiao office room, where she receives her contacts in order to seal out prodigious pacts involving money laundering, human traffic and drugs. This house is condemned to extinction, in my opinion it will be one of the main hot spots in the game, at least in the early stages of the story. Once the opportunity to punish the guilty ones ceases out, Garrett will no longer allow this lair of corruption to be freely on the loose – the blossoms are living on borrowed time.