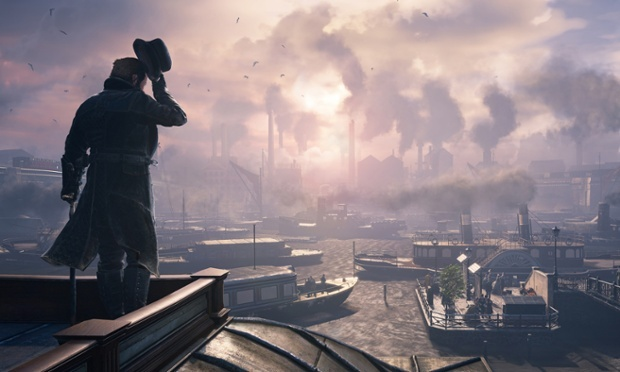 Ubisoft has announced this years’ entry in the Assassin’s Creed franchise, called Assassin’s Creed: Syndicate, due for release on the 23rd October on PS4 and Xbox One, with a PC release scheduled later on in autumn. There is no word on an appearance on the PS3 or Xbox 360.

The game will be set in London, 1868, at the height of the Industrial Revolution. You will play as two lead characters, twins Jacob and Evie Frye, who are raised to follow the Creed. Jacob is described as determined, hot headed and rebellious and leader of an underground gang. Evie however, is described as a master of stealth and self-control.

The game will see the twins teaming up against rivals, plutocrats and Templars to try and free the masses from poverty and gain control of London.

There will be a number of new weapons and ways to traverse the landscape, described as the ‘largest, most modern city seen in an Assassin’s Creed to date’. New weapons at your disposal include brass knuckles, a kukri knife, a revolver and the Assassin’s gauntlet.

Syndicate will also introduce a rope launcher to allow players to scale tall buildings or use as a zip line to make moving roof to roof easier and set up the perfect kill. There are also horse-drawn carriages and high-speed trains to use at your disposal.

“The ability to lead an underground gang, commandeer any vehicle on hand and use modern tools to take on an expansive and fast-paced Victorian London sets this game apart,” Ubisofts’ creative director Marc-Alexis Côté said. “Assassin’s Creed Syndicate has been in development for more than two years and this new modern take on the living open world will please Assassin’s Creed fans and newcomers alike.”

Despite two playable characters, a report in the Guardian says that not only will there be no form of co-op; the game will also be scrapping multiplayer altogether.